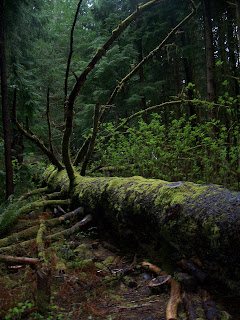 Every kid in America learns about the great explorations of Lewis and Clark, and most will learn at least the name Sacagawea while they're at it, but knowing that a native American woman helped as a guide just really doesn't do this woman or her story justice.

We love exploration, and stories of adventure always resonate with me. Yes, the men were brave and adventurous, but without  Sacagawea's assistance, I doubt they would have made it. As a mother, I am especially in awe that during the entire adventure she was either pregnant or carrying a baby on her back. That is one super mama. Her husband seems like a creeper old man, but that is another story.

As part of our own recent Great Pacific North West Adventure, we did a little Lewis and Clark exploration along the Columbia River in Oregon. Our route started near the ocean at Fort Clatsop, a replica of the fort that the party spent a winter in before returning home. Apparently, it rained all but 12 days out of the three months they spent there, making it a less than pleasant experience. 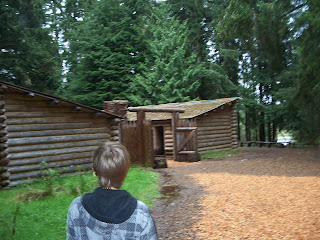 The weather was very cold and wet for our visit, giving it an authentic feel, except when we got tired of hiking in the rain, we got in a car with heated seats and ate chips. Gotta love modern conveniences.

We also saw replicas of the dug out canoes they used, and could not imagine heading down that massive river on one of them. When one flipped over, Sacagawea was the one to save all their scientific journals and samples, with the baby on her back on her back of course. Did I mention no life vests? In our safety immersed culture, it's hard to even picture a baby in a tiny boat at all, let alone with no flotation device.

We've enjoyed looking at the Lewis and Clark story from different points of view through historical fiction, my personal favorites being that of Sacagawea of course, but also that of Seaman, the big dog that accompanied the group. 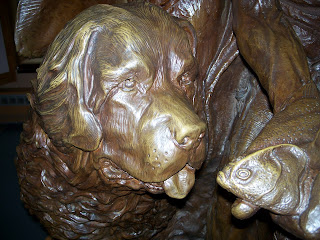 His life size statue looks so much like our big dog, it made us all miss him. It also made me think about how smelly that wet dog would have been in those cold and rainy months. And, how much poison oak he would have spread.

Another interesting note....we read that the Lewis and Clark pieces were recently opened again at the Smithsonian Institute, and all of the museum staff who handled them got poison oak. So, the oil of that evil plant can still do it's itchy mayhem after over 100 years. Crazy.

After our fill of Fort Clatsop, we headed up the river that the Lewis and Clark party had came down, talking about the bravery of people who attempt such feats. I've had people tell me that I'm brave for traveling solo with my kids these days. HA- I'm pretty sure I'm completely incompetent compared to Sacagewea. I have maps, a laptop, convenience stores, snacks and towing service. I can't even fathom doing half of what she did, especially with a baby on my back.
2 comments: Links to this post