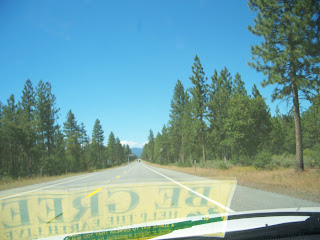 On a recent weekend, we were sick of the heat, and had fallen behind on pool maintenance, making our pool an odd shade that did not appeal to me for swimming. While we dosed it with chemicals and waited for the color to magically move into the blue scale, we decided to take a little road trip up into the mountains to cool off. We headed to Burney Falls State Park in the Cascade region of north eastern California.

Burney Falls  may not be one of the biggest waterfalls in the state, but it is definitely a sight worth seeing. The park and falls are named after Samuel Burney, a pioneer who settled in the area in the 1800s. Burneys' descendants later saved the area from development by buying the land, and giving it to the state as a gift in the 1920s. I am always thankful for the people who came long before my time, but had the foresight to see things they wanted preserved for future generations. I am also thankful they had the resources to pull it off. 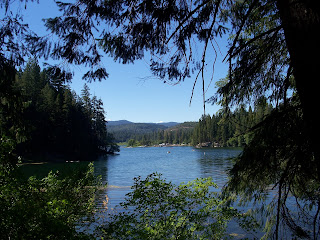 The first time I took my kids to Burney Falls, they were probably between 3 and 5 years old, and I was so proud of them for hiking the entire loop trail to the falls. It seemed like quite a feat for such little legs. Like all kids, they grow like weeds, and when we went back a few years later, they blazed through the same trail in no time as if there were nothing to it. This time we went, the usual trail was closed, which at first annoyed me as I thought that was the only way to get to the falls, but instead, we discovered a few other trails I never knew existed. We hiked along beautiful Lake Briton, and a scenic creek, which are both fed by the falls, past some very rocky and very dusty hillsides, and through some lovely mountain forest made up of mixed age trees. 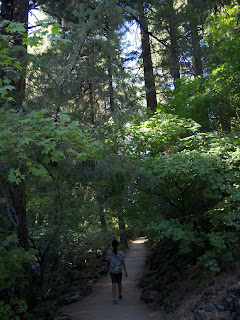 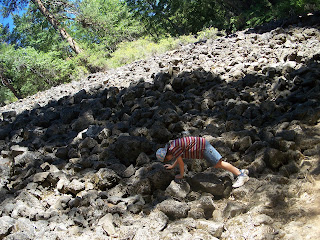 The trail was easy, and the scenery was fabulous. The park itself was rather crowded I thought, especially for being in the middle of nowhere, but the trails themselves didn't seem overly packed at least.

The trail led to the base of the 129 foot falls, where we briefly considered taking a swim, then after dipping our dusty toes, we decided that we are not freezing cold, snow melt, mountain type swimmers after all. 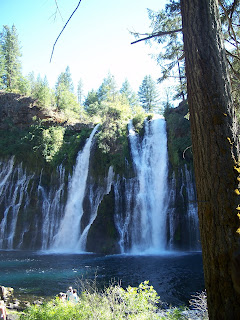 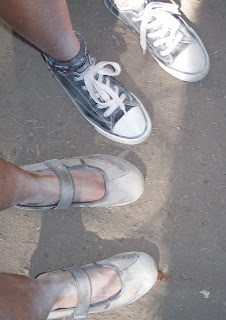 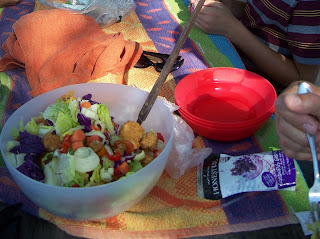 We were starving by the time we got back to where we started, so we had a picnic lunch on the beach at Lake Briton. It was ridiculously packed with people, and although the water there might have been more appealing temperature wise, I am easily grossed out by the thought of submerging in water with way too many people in too small an area, especially since many of them were small children without swim diapers. So, we just ate, and tried to discourage the overfed, overweight squirrels and chipmunks from trying to steal our meal. They looked as though they were more used to Cheetos than fruit and salad anyway, and they weren't exactly speedy in their attempted thefts. But, we did have to make sure to watch our food and our ankles as they were definitely eyeballing us and chattering at us in angry tones. 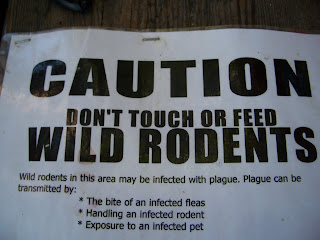 Oh- and I should mention, there were more plague warning signs. They weren't quite as dire as the ones I saw a while back in Hat Creek, but this time I did get a picture. The rodents at Burney Falls looked like they were more likely to suffer from heart disease or diabetes from their human junk food diets than plaque though, but nevertheless, I had no desire to have them scamper across my table.

After lunch we picked up Junior Ranger packets and went for another hike. Portions of the Pacific Coast Trail pass through the park, and along some of the trails we hiked. 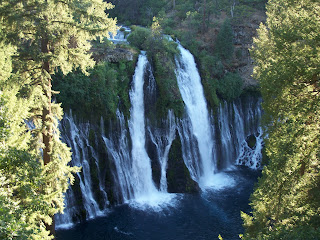 The view from above the falls gives a different view of the beauty of the site. The trail led us to the spring that feeds the fabulous waterfalls, and we were amazed that a practically dry creek bed can lead into such a massive amount of water. Apparently, over 100 million gallons per day goes over the side of the hill. We sat in awe for a while, imagining what we would do with 1/1000th of that amount of water at our parched and dry little homestead.

Unfortunately, the visitor center closed before we finished our hikes and got back there, so the kids weren't able to finish their Junior Ranger packs and get their badges. But, I'm sure we can make it up to Burney Falls again sometime. They have a Pioneer Heritage Day in the fall that sounds fun, so maybe they can wrap it up then.

That night, I chatted with dear husband about how much fun our kids are right now. They are ages where they can keep up on hikes, and are interested in nature, history, science, and time with their family. Life is good, indeed.
No comments: