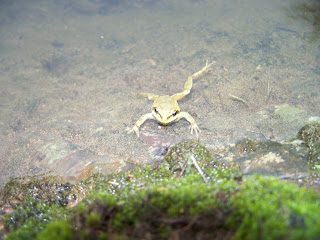 I feel like my home is being invaded by frogs. I don't know if it's from all the late rain, or what, but we have frogs everywhere, and I mean everywhere, these days. I step out on the porch, and a frog hops out of the dogs water dish. I trim some dead blooms off a rose bush, and a frog jumps on my foot. I walk down to the chicken coop in the dark, and a toad gives me a heart attack shuffling in the grass and sounding like a snake.

But, the frogs and toads outside are something we're fairly used to. We've been rescuing tadpoles for years- when the creek and puddles down the hill from us are drying up and you know that all the little guys with no legs are not going to make it unless they get more water, we try to make sure they're moist long enough to get legs at least. So most summers we have a good number of frogs living in the plants outside our house. It's as dry as can be around here, and living in our drought tolerant bushes that hardly ever get watered anyway is their only chance at any moisture at all for quite a ways. Since a frogs survival depends on water (they take in water and some oxygen through their skin) I wonder what the the ones who hatched, grew and hopped off into the woods do when everything dries up for the season. Maybe they bury themselves in the mud or something, because at some point, there is absolutely no water left at their hatching place down the hill. 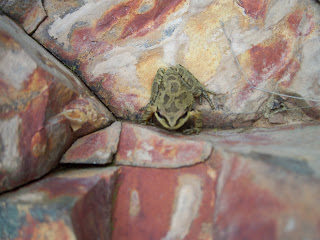 In any case, as curious as I am about those frogs, I am more curious as to why on earth I have so many frogs up here this year. Maybe we were over zealous with the tadpole rescue efforts, because this year, the frogs haven't just been outside our house. We've been finding them inside, and not just occasionally either. We're pretty much finding at least a frog a day inside- one day, we found three of them inside the house. It's beginning to feel like a Biblical plague. They've been in the houseplants, in the windows, and the doorway. I unknowingly touched one on a light switch in the dark the other night, and the unexpected gooey squishy feeling made me jump up and scream, and generally freak out. It also probably added to the silver highlights in my hair. I found one in the shower yesterday, and one in an empty juice pitcher in my kitchen sink this morning. Yes, that was gross, and I'm not sure the fate of that pitcher. I may have to downgrade it to vase, as I think I may always see the image of the frog staring at me in it. As I was up late reading last night, one hopped across the rug. My husband just found one in his shoe- when he put it on! I don't think the frog appreciated that. My son tried to catch one in the living room the other day, but it was too quick and jumped behind the couch. The poor thing was immediately and completely coated in a dog hairball. It looked very uncomfortable for the poor thing, but at least he was easier to catch. 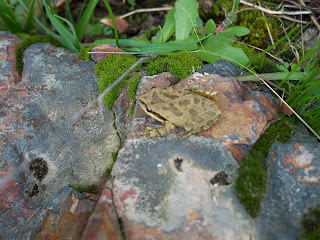 If I'm going to have frogs invading my home, I guess I should be glad that they are generally cute little frogs, only about the size of a quarter as opposed to big ugly things. But still, they're a lot cuter when they're outside. I enjoy photographing frogs outside, but since they tend to hop off frantically when confronted by flashing clicking things, I am sticking with just trying to catch them inside, so I can release them back outside. I'm afraid if they get stuck in here, they'll end up drying out behind some furniture, and I'll find mummified little froglets the next time I move the furniture. I already found one dried up in a glass bowl in a sunny place, and it was a bit sad, as well as very creepy looking. We haven't decided whether or not to check it out under the microscope yet.

Someone mentioned to me that many people eat frogs, but despite the fact that I'm sure they taste just like chicken and all, I just don't think that I'm that resourceful. Besides these frogs aren't really large enough in my opinion to bother cooking up. I figured I would at least try to be a good homeschooling mom though, and turn this frog invasion into a learning opportunity in any case. We found lots of interesting facts at this website- for example, who knew that some frogs actually lay their eggs in dry areas and keep them wet with urine? Or that some frogs begin the molting process by eating the skin around their mouths, and then pulling the rest of the skin off over their head and eating it? These are the kind of gross and weird facts that I'll bet my kids will love. We may never know what is behind this summer of frogs, but maybe we'll learn a thing or two through it. I'm pretty sure my husband learned to shake his shoes out before he sticks his foot in anyway.
7 comments: