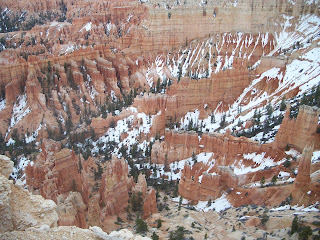 Bryce Canyon National Park is another one of those places I knew very little about before I set off to explore the south west. In fact, I think I had only heard of it once or twice, but what I had heard was that it was awesome, and that we should go.

I'm so, so happy we did. This place is amazing, and I think that among our big canyon stops (Zion, Bryce and Grand) Bryce may just have been the prettiest. The whole canyon is full of these strange looking, wonderfully colored spires of rock, which are called hoodoos. The brochures had a bunch of poetic hooplah about the hoodoos enchanting us with their magical spell. We found the description endlessly amusing, but in hindsight, perhaps I was bewitched by them. I took about 15 million hoodoo pictures, and somehow came up with the idea to spend a small fortune to ride a horse among them. (The picture taking is not nearly as out of character as the splurging, but even it was extreme.) 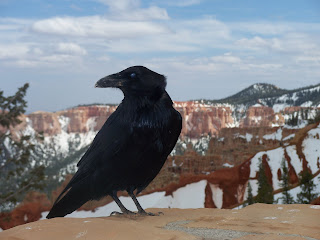 Even though it was technically well into spring, it wasn't so spring like at 8500 feet in elevation. I've mentioned before that my trusty old Volvo is not impressed with high elevations, and as we neared Bryce Canyon, she started up her shuttering routine. At this point, I was kind of used to it, and once we left Zion, there weren't a lot of death drop cliffs to worry about the car cutting out on, so I wasn't all that nervous about it.
We were very thankful not only to find a lovely campsite right in the park, but that we had such warm, fluffy REI sleeping bags because this place was really, really cold. In fact, I'd say it bordered on frigid. We tried going to the Junior Ranger star viewing program our first night there, but it was so cold, we feared freezing before it was our turn to look through the telescope. We just hurried back to our tent, and tried to make sure every inch of our skin was under the covers. 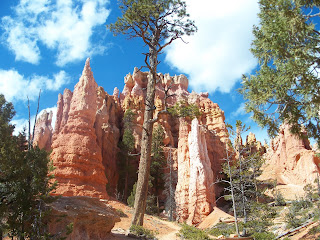 The next day, we heard it might even be colder, and that thunderstorms were a possibility. I asked a ranger his opinion on lightning and tents, and he gave me a stern warning that we should get into our car immediately if lightning is near. He said something like Bryce has the largest number of lightning strike injuries of any park, and "they take lightning VERY seriously there." Then he told me an assortment of painful things that happen if you don't die from a lightning strike. These super earnest park rangers usually make me smile, although the charm of how much they like their job does wear off if I am the recipient of a very strict lecture. Thankfully, it was a quick one. 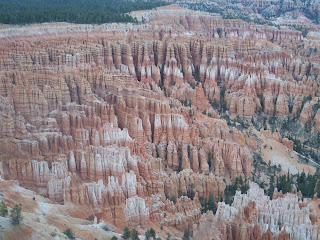 We spent the day exploring the road through the park, checking out all the amazing scenic view points and taking some small hikes, all thunder and lightning free. When night rolled around, we decided we would just unfold the back seats of the wagon, and sleep there in case the thunderstorm did come. Well, thank goodness, because in the middle of the night, we woke up to the sound of it snowing. Our poor tent was a bit saggy by morning, but she didn't totally collapse. Although the tent was a sad sight, the rest of the world around us was amazingly beautiful.

We had to get going early because we were scheduled for the pricey morning horse ride, and we did not want to miss out. Getting out of a cozy bed is not my strong point any time, but when I can see my breath, and I have to go outside to prepare coffee and breakfast, and there is SNOW on the ground, well...it was a test of all of our strengths to say the least, but we did it. 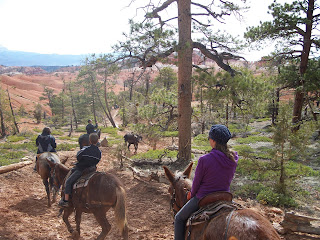 My family actually rode mules, which our very cool cowboy guide informed us were far superior for mountain trail riding, and more sure footed than horses. Apparently, their eyes are located further to the side on their head so they have a better view of their foot placement. Or maybe he just said that since he didn't give us horses. In any case, we all were happy with our chosen animals.
They all looked well cared for, but I wondered if they were bored of their daily routine with the same trail, every day. Maybe that's why they seemed to like walking as close to the cliff edge as possible- to amuse themselves by freaking out the tourists. 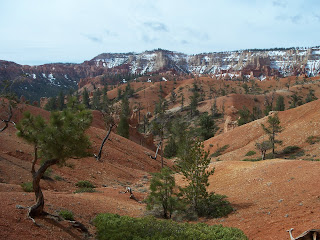 Cowboy Dave had just the right amount of jokes, stories and history to share. We learned a little about the Mormons and the mountains, but the family in front of us also added to the entertainment. One girls' horse decided to walk through a bush and lean forward with her facing down a really steep hill. The girl handled it really well, and was fine, but her mother... well, we thought she was going to pass out. Then, the poor dad was taking pictures, and not paying the least bit of attention to the animal whose back he was on, when his horse walked right under some low tree branches giving the man a good scrape. The lesson we took from it was to pay attention when on horse back. We went to the canyon floor and back, and by the end, I knew I'd be walking funny for days. We had spent as much on the excursion as we would have in a couple weeks on food, but we were coming towards the end of our southwest adventure, and we all agreed this splurge was worth it.

I'd love to visit those magical hoodoos at Bryce again, but if I do, I will definitely either wait until it's really spring, or my splurging will be to stay at the lodge.
2 comments: