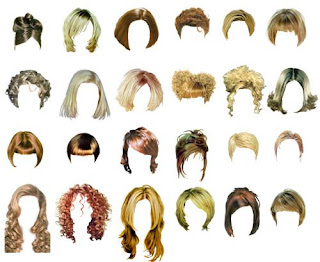 Here's a life lesson of the day to take note of: You might want to be wary of $5 student haircuts. Now, this may seem obvious to some people, but I am a woman of thrifty nature, and with the economy such as it is, and all the financial gloom and doom in the media, I've been on the lookout for ways to be thriftier than usual. One of my ideas of places to save was on haircuts. I've never been comfortable cutting my sons hair as I have a deep fear of accidentally creating a bowl cut or a mullet. My daughter's hair used to be easy to cut in the past when it was all one length, but recently, she decided that she wants stylish layers. I was feeling the urge to add a few layers to give some life to my own hair as well, and not about to attempt that on my own. But, between the three of us, I'd be looking at spending $50 to $100 at least.

Then, we remembered seeing an ad for the beauty school featuring trained students under professional supervision who could cut our hair for only $5 each. We decided to give it a try- I mean, the girls giving haircuts at the mall for $20 each with no professional supervision were probably just in that beauty school a few months earlier. At least the ones still in school have a teacher overseeing the whole thing. Yes, this seemed perfectly logical at the time. When we called and found out they could schedule all three of us that very afternoon, we jumped.
On arriving at the front desk of the beauty school, we began having second thoughts. Two happy, very nice, young ladies hurried up to offer their hair cutting services. One had rainbow colored hair in a sort of biggish style. The colors were all very pretty, but perhaps one or two at a time rather than five colors at once, or at least spacing the orange and purple so they were not right next to each other might have been more my taste. The other gal had a very short boy style with a thin, long braided tail that I am guessing was another students project in hair extensions. At first glance, neither was what we would have imagined the person holding scissors to our heads and deciding the fate of our hairdos to look like, but I always encourage my kids to have an open mind. So, I sent my kids to go with them, and I waited for the next stylist. When she walked up a minute later, I was relieved that she had a cute hairstyle- one that I might choose for myself. I was very happy to see that, but it didn't occur to me at  the time that someone else had cut her hair. Just because a person has a cute hair cut does not necessarily mean they can give you one.
So, we were seated, and the cutting began. My kids looked nervous at first, and I tried to give them reassuring smiles. During the entire time of our haircuts, another student sat in an empty chair in front of the mirror next to us looking bored and creating on her own head what may be one of the tallest hairstyles I have ever seen. Rat, spray, tease, spray- her creation kept growing. I'm not sure if she would be able to sit up straight in a car without her hair having to bend, but she didn't look concerned. She followed it up with Cleopatra eyeliner, and Geisha lipstick. I had to give my kids the big eye "don't stare!" look, because they were slack jawed in amazement at the use of such quantities of hairspray. Actually, my son had to ask what it was that she kept spraying on her head, as the poor child is being raised by a grooming slacker who rarely bothers with products.

Anyway, the rainbow haired girl working on my daughter was confident, and began snipping away. In no time she was standing next to me with a cute new style. In fact, she got the best haircut of any of us by far.

The shorter haired girl with my son was more hesitant. He had longish hair, that would have looked great on a surfer with gorgeous natural highlights that people would pay lots for. She didn't seem to want to cut it- in fact she kept asking him "Are you sure you want more cut off?" with a pained look on her face. I thought he was only going to get a trim, but he ended up getting all his lovely highlights chopped, by his own choice though. It was a tad more than slightly crooked, and I kept finding stray hairs that were missed, but he was very happy with his new look. In fact, he was all smiles, and seemed to have loved the attention from the girl, so I certainly didn't want to burst his bubble by mentioning the flaws.

My stylist was by far the most nervous. I got the feeling that I was one of her first non-mannequin haircuts. She was sweet as pie, and was actually doing OK. I tried to keep a nice mellow conversation going- nothing too distracting to the work at hand, but hoping that if she was calm, her hands wouldn't be shaking. The trouble was, she was really slow, and afraid to make any mistakes (which I appreciated.) But, she kept calling the scissor happy instructor over for reassurance (which I didn't so much appreciate.)

The teacher was a highly made up gal- hair, nails, make up, clicky heels- the whole bit. She was extremely confident in her skills- so confident that she seemed to not hear the fact that I didn't really want to lose any length, or really much of anything I said. She was too busy impressing her student with her amazing knowledge of styling. I had been wanting to grow my hair out (after donating about 10" last summer) and I only wanted a few layers, but Miss Snippity Snips kept coming by and just taking a little here, a little there while showing my student how to use all of the fancy different scissors. Every time she did something on one side, we obviously had to do the other. Every time she would walk by, or the student would ask her for advice, I would cringe. I sensed that she felt herself a master artist who was sure she knew better than her silly commissioners, and therefore couldn't be bothered to listen to them. Only it wasn't a clump of clay- it was my hair, and I was already in too deep to walk out.

An hour and a half later, and about three inches shorter,  I told my nice stylist I thought it was just great. It was even on both sides, and it was a cute style in the end, although not at all what I had asked for when I went in. She seemed to sense that I wasn't 100% satisfied, and offered to keep going. I politely declined the offer, and tried to reassure her that she was doing a fine job.

I'm aware that it could have been much worse, and that I'm lucky we got out of there in the condition we did. I'm also aware now of just how risky $5 haircuts can be.
5 comments: