Saguaro and a Shoot Em Up 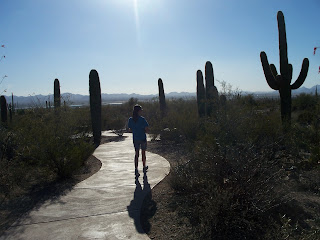 Saguaro (the "g" is pronounced like a "w" if you don't want to go around saying it wrong over and over a baziliion times before anyone mentions it, like I did) is the stereotypical cactus that would most likely come to mind if you were imagining a cactus in the desert of the American south west. Saguaro National Park is, as you might guess, covered in miles of them. It's actually two parks in Arizona with the city of Tuscon right smack in the middle. 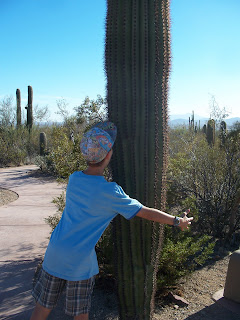 Some of the huge saguaros are up to 200 years old, and they have a woody stem that can be used for building when they die. They seem more like trees than cacti in that case, but as massive and magnificent as they are, they aren't really the kind of trees you want  to go hugging. While still alive, they are home to several cute little birds who manage to hop on and about the spines without getting hurt. They even nest in holes in the cacti. One species of the birds may look adorable, but finds its dinner by snatching lizards from the ground, and impaling them on the spikes to dry out and be enjoyed later.

Saguaro National Park doesn't have camp grounds, but there is another park connected to it that does. We spent a night there, which is where we found the angry scorpion under our tent the next morning. 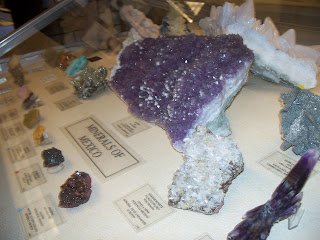 We decided to get in some Wild West style gun slinging action while we were in this part of the country. Very nearby is Old Tuscon Studios, where over 300 western movies, including some John Wayne and Clint Eastwood films were shot. Now, I don't even actually like westerns, but apparently they filmed some Little House on the Prairie there too.

Anyway, it seemed kind of pricey, but we were all set to go until we found out the gun fight wouldn't take place for several hours. In the mean time, we headed into Tuscon, where we found a marvelous collection of gems and minerals from around the world at the Flandrau Science Museum. After that, I really wanted to put some miles behind us, so we opted to head east, and find our wild west action elsewhere. 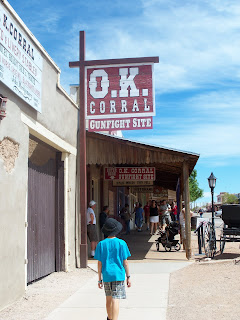 We ended up going to Tombstone, which proudly bills itself as "the town too tough to die" and most certainly has the wild west, shoot em up spirit going on. It was the home of Wyatt Earp's famous shootout at the OK Corral, and they do a fabulous reenactment of  it a couple of times a day. As I mentioned, I'm not normally a fan of western themed things, nor do I particularly like guns, but the energy of the place was contagious, and really fun. Of course in the end, bullets were flying, and in the real gun fight, three people died. I wouldn't recommend it for really little kids for that reason, but I must say, the actors were great, and the show was even funny in parts- definitely worth the $10, which included the Historama, which was like a rotating, moving diorama / slide show / presentation on the history of the area narrated by Vincent price. You also get to stroll around the actual site and a bunch of historic and fun exhibits- some, my kids found fascinating, like the stuff about Geronimo- others, like the working ladies known as "soiled doves," went right past my Boy Child, but first confused, then shocked the heck out my Girl Child. My explanation was an edited version, but still, she was appalled. 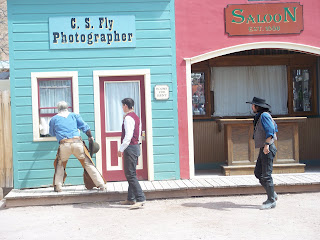 We explored the old stagecoaches, and buildings, and Boy Child tried to rope a stationary bull. There were people in period costume everywhere in the town, not just at the gun fight site. There were also signs in lots of stores asking people not to carry weapons inside, and I wondered how many people actually would be carrying guns in the first place. Then, I remembered we were in Arizona.

Having had our fill of Wild West style action, and learning more than we bargained for, we headed off towards New Mexico with the sun setting setting behind us. 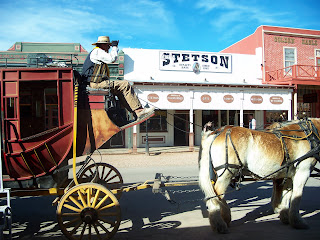