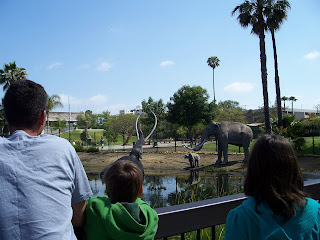 Right in the midst of downtown L.A., with big high rise buildings all around on a very busy street, is an incredible piece of the very, very distant past. Since the 1970's, scientists have been pulling pieces of history from a bunch of goo in the ground at the La Brea Tar Pits, and the things they've dug up are pretty impressive.

This stop on our Southern California Learning Adventure (also known as family vacation) is one I would definitely recommend.


The tar pits themselves are actually a rather stinky lake with a few statues of the sorts of animals that got stuck there, and some pretty landscaping, but the George C. Page museum on site is where all the results of decades of scientist and volunteer labor are on display. It houses an amazing number of specimens that were pulled up from the site over the years, and they're still digging every summer. This spot has probably been on of the richest sources of prehistoric animal fossils in the world. 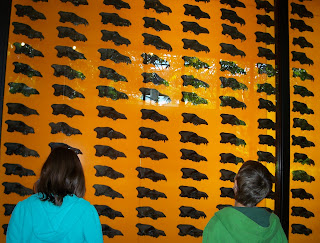 There is an entire wall of dire wolf skulls, several complete mastadon skeletons, giant sloths, giant bison, American lions, and lots and lots of saber tooth cats. It's just crazy to imagine that all those creatures were once walking on what are now the streets of L.A. My kids loved seeing not only the skeletons, but the models and paintings of what scientists think it might have looked like then in the very spot we were standing.

There are no dinosaurs at the La Brea Tar Pits; these prehistoric creatures came well after the dinosaurs were long gone, but many of these species met the same fate of extinction. 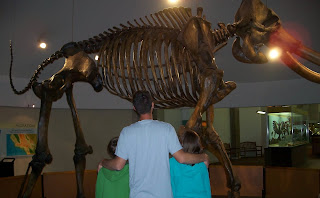 We learned that massive entrapment in the tar was probably a relatively uncommon fate, but that every decade or so, the sticky goo would be covered with enough leaves and debris that some poor animal would walk over it, and manage to get stuck. Their cries might attract members of their herd or family (if they were herd animals) and they would also become trapped. The communal cries would attract predators who would also get stuck, followed by scavengers who would join the party. They say the tar didn't suck them under, it just stuck them there until something came along and got them, or they either dehydrated or starved. Pretty depressing for the poor animals involved, but fascinating at the same time because the bones were so well preserved in all that tar, it gives a lot of information about those animals, and their lives. 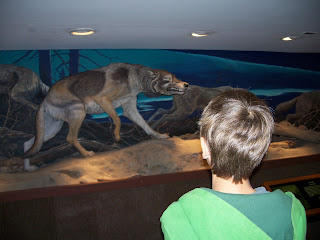 Many of the saber tooth cats had broken and infected saber teeth in their lives, and many of the dire wolves had broken bones that had healed, they speculate from fights.

The humongous time line along one wall gives an good visual image of how small our time is in the scheme of things. Tar still bubbles up in random places along the paths outside the museum, and there are scientists that you can see working on cleaning and sorting the findings on the inside. According to the informative movie, the tar is not toxic to human skin, but it doesn't smell or look like something that would exactly be good for you.While I think volunteering in a lot of museums would be fun as well as educational, cleaning tarry old fragile things is probably not something my clan would be that good at. 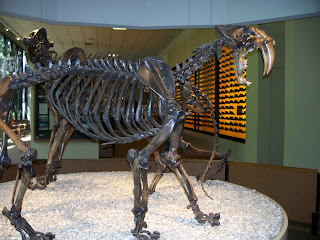 Still, it was a great learning experience, and gives us a whole new perspective on the history of Los Angeles.

There are a bunch of other interesting looking museums along the same street- an architecture one, a huge art one, an automobile one- a family could spend a lot of time there, but we only had a few hours, so we limited ourselves to the museum at the tar pits. It also happens to be an affiliate in the ASTC association of science museums- another plug for membership with your local science museum- with the benefits of getting into museums all over, it more than pays for itself, and really enhances travels and learning on the road. In fact, we all agreed that this science stop alone was worth the membership for us.

I'd love to hear about amazing museums other people know of in their areas, as we're really enjoying this learning on the road. We hope to do as much as possible whenever we have the chance, and are always looking for destinations to add to our wish list of places to go.