Where Is All The Creativity In The World?

I love living with creative people. They come up with the most interesting things. Granted, some of these things are odd, and semi-useless, and add to the cluttered effect of my home, but they are interesting none the less. Things like this... 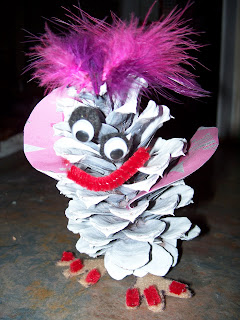 Freestyle artistry is big in our homeschooling adventure, so my kids come up with a lot of imaginative things on their own at home. But, these little beauties were made at an Alternative Gift Fair that the kids and I volunteered at over the holiday season. We were assigned to work in a craft booth helping people make "Snow Birds" out of pine cones. My kids got busy and whipped up some samples in no time. There was also an "example bird" that did look slightly more professional, but my kids just went for it with their own ideas including painted toenails and extra eyeballs. It's all about the details, and I liked their birds the best. 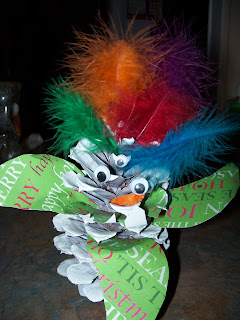 With children, there was a mixture of some kids wanting step by step directions, and to make an exact copy of one that someone else made. Other kids, who did do their own thing, often seemed like they were hiding the results from me. I tried to make it clear that at my booth, they could make their crafty Snow Bird however they wanted. In fact, they could make a Snow Poodle, and that would be fine with me. I applauded the creativity. I wasn't there to grade anyone or judge their art, just to straighten the paper and put the glue caps back on. But many of the school age kids who didn't copy an example seemed like they thought they were going to get in trouble or something. I did my best to encourage them, and wondered if overly structured education and micromanagement of every creative process is what does this.

The ones who were younger than preschool age mostly just enjoyed smearing glue, glitter and paper together unapologetically. They apparently hadn't had their creativity stunted with formal lessons yet. I think the desire to experiment, play and create come naturally to all young humans, but unfortunately it is squelched early on for many.

With the adults, there were also interesting reactions. We tried keeping track of how many times we were asked by very serious people "OK, so where do I glue the eyes?"

Ummm.... wherever you want- we have a painted pinecone and some feathers here that's supposed to be a bird- we're using our imaginations. If you're feeling a little cyclops-like, you could just do one big google eye in the middle. The next most common question was "Well, how do I glue them on?"

Well.... by using the glue was my thought, and that was what I recommended, but many people don't seem to have used glue lately, and were almost baffled by the process. I think I did a very good job of not being patronizing or sarcastic either, because the people were seriously trying to be crafty, and that is a good thing. By the end of the project, most people started loosening up, and letting their artistic tendencies flow a bit. It was like finding a coal in a long smothered fire.

We all decided we like being a part of encouraging imagination and freeform artistic interpretation- even if it is just with something as ridiculous as painted pinecone chickens. I think we're going to volunteer in more craft booths in the future, and continue to rebelliously encourage people to make whatever they want when they stop by our table. It's good to know that there is still plenty of creativity in the world- even in people who don't remember it's there anymore- they just need to stop by a renegade craft booth to find it.
3 comments: Links to this post