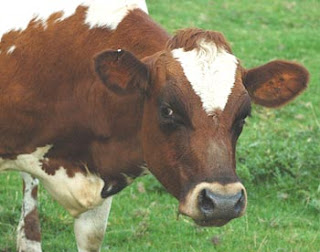 We drove up to our house last night to see that my husband had butchered the cow and had it hanging up. It's always something new and surprising to come home to around here... One day in February, my husband called me on my cell phone to confess that he had bought a cow. Note to husbands- I would not recommend bringing home something as large as a cow without at least talking about it first. Especially when your wife had just sold 2 goats that she liked in order to reduce the number of animals grazing on her pasture that has not had enough rain in two years. Especially when a cow eats more than all of her goats put together, and leaves very, very large piles of manure. Especially when it's the day before Valentines Day and your wedding anniversary, and you have no other gift for her. No fellows, I really would not recommend that at all. “It was a really good deal” does not make it a suitable surprise. Not that I'm bitter or anything. Did I mention that the cow advertised as a “steer” and delivered in a major downpour of a rainstorm turned out to not even be neutered, and was therefore actually a young bull- with horns even?

In any case, with the last of the cool weather upon us, and my husband having a number of summer commitments, he decided that yesterday was butchering day. Apparently we got home from town quicker than he thought we would (he neglected to mention that it was butchering day), and young Mr. Moo Cow's carcass was hanging there. My husband had hoped to have it out of sight before we drove up since we have the gross out factor when it is at the stage in between what looks like cow, and what looks like meat. But, he didn't quite have time, so we got the full visual.

Later, when my husband was taking the guts and other parts too gross for even dogs out to be an offering to the wild things at an old homestead a few miles away, our larger dog pulled the hide off it's hanging spot and began to chew on it. I got the dog away, and tried to pick the hide out of the dirt, but it was really heavy, not to mention gross, and I gave up. My Indian ancestors would be ashamed of what a wussy I am. Eventually hubby got back and dealt with it.

This morning, I'm looking up hide tanning info (it's a lot of really gross work, but Mr. Moo Cow, may he rest in peace, did have a nice coat) Apparently, many tribes traditionally boiled the hide with the brains to soften it. Others chewed on it to soften it. We won't be doing that though as the brains went with the rest of the offering to nature, and the chewing thing is just not even an option for me.

One kid is now dissecting the heart and the other is helping make jerky. I think I'll be going for a long walk and hopefully it will all be put away when I get home. And I think I'm eating tofu for lunch.
4 comments: Links to this post