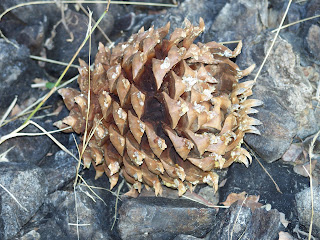 It's been such an unbelievably mild summer in northern California, I haven't even thought about fire season. Until now. Suddenly, it's oppressively hot, and to top off the misery of melting in front of my swamp cooler, the wind is blowing so fiercely that it woke me this morning sounding like a motorcycle speeding on the freeway. The grass is bone dry, the plants and trees have shriveled, and something in the air just seems like trouble brewing . It feels like fire season.

I don't want to freak out my kids, but I do want them to be prepared, to know what to do just in case. So, I ask them to start thinking about it. We've been through this before, of course, which is probably why I did end up freaking them out anyway. My kids may have never had a school fire drill- they've never been to school, but living in the mountains, they have had the real thing more than once. No alarms and orderly exits, just smoke, wind and quickly trying to evaluate what is important enough to save and how to move so many animals.

It's a strange feeling to think about what you actually want to take with you. During our first wildfire scare, we had the luxury of a day to think hard about just that. The fire started a few miles away, but the wind was blowing in our direction, and the only thing in between were pine trees and manzanita bushes. Even before the call from the sheriffs office warning us to start packing, it didn't take a genius to figure out that we should be doing just that. 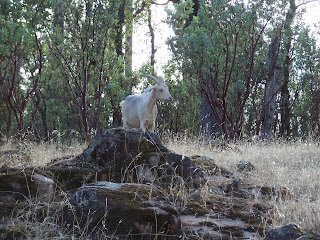 Of course living things came first, and we have a lot of them around here. Thank God for wonderful friends who came and picked up everything from our cats and dogs to our goats, chickens and ducks and housed them temporarily at their homes, even though they were not set up for such things.

Next came pictures and then as we still had a few hours before we had to be out, we packed our favorite clothes, books, art and toys. I let each kid pick for themselves what would go in their suitcase because you never really know what's special to another person. Some of our helpers couldn't understand why my Girl Child was choosing a doll made from a pancake syrup bottle over an expensive porcelain doll, and seemed upset about it. I think they expected me to be the voice of reason. Well, I reasoned that since Girl Child was the one who played with the things, she could probably decide what was actually important for herself. Mrs Butterworths made the cut.

We still laugh about that, and we'll probably still have that syrup bottle to give my grandkids. Our neighborhood was evacuated for a few days, but fortunately untouched by the fire. 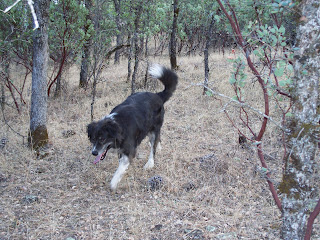 Our next scare came a few years later. This time, we were in town, and noticed a huge plume of smoke in the east. Since it looked like it could be near our house, and fires moves quickly in the foothills, we skipped the rest of our errands and headed towards home. As we drove the 20 miles, the kids began to freak out about our elderly dog being stranded and unable to escape. I tried to calmly reassure them that we would be home in time.

Well, I looked like a big idiot a few minutes later when we found the road to our property blocked by the worlds grumpiest police man. He had no compassion whatsoever as he dryly told my crying kids that we could not get in, no matter what. A man with a press pass went in, but we couldn't. My Girl Child wanted me to just hit the gas and floor it past the cop, but he seemed like the type that would shoot out my tire and then drag me out of the car and taser me in front of my kids, so I opted not to. But, I was furious. Unfortunately, Officer Meanie made just about the worst first impression my kids could have ever had of the police force with his complete lack of kindness, respect or empathy.

Cars full of equally angry neighbors lined up, all of whom were being told no, you cannot go save your horses, your dogs, anything. One woman was near hysterics as her teenage son was home alone with no car to get out, but she was told to just wait while they did their jobs. I imagined the press man in there taking pictures of our burning things while we were supposed to sit there and wait.

Thankfully the fire fighters did their jobs very well. No homes, animals or people were harmed, and we very much appreciated their hard work. We went home and planned what would we do if it happened again. Things were a little more organized "in case of emergency" for a while, but of course life goes on. We can't live with all of our important things packed and ready all the time. They are out everywhere all over the house being looked at, used, played with and enjoyed. 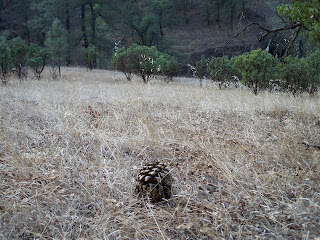 But today when I woke up to hazy air and dry leaves rustling in the hot wind, I realized it's that time again- we need to think along those lines of being prepared. I mentally located my favorite picture albums while I told my kids to at least know where their most prized things are, just in case. I stepped out for a bit and came back to find my kids had packed bags, cat carriers and dog leashes ready to go. I'm very proud of them for thinking and planning, but I hadn't really meant for them to take it that far. I'm pretty sure I scared them and think if I had been gone too long, they might have started taking the pictures off the walls.

I let them know that it's looking like the haze in the air is coming from fires that are far away enough to the north that we aren't at risk from them. It's still the season and we're not out of the woods yet, but we don't have to pack up everything into boxes just so it's ready "in case." Just knowing where things are, and what our priorities are will have to be good enough. Maybe we'll attempt a rain dance as well.
No comments: