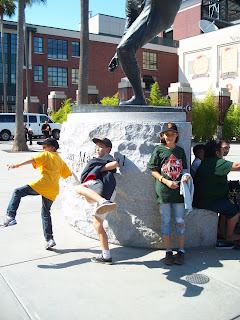 I am not a sports fan, never have been, but somehow I really get a kick out of my kids playing baseball. This has been their second season with the Junior Giants- a low key, instructional league that suits us well. They don't officially keep score (although often the kids do,) the players skills range from never having played before to very experienced, and amusingly, the parents have to take an oath that we won't be bad sports, yell at the kids, or speak badly about the coaches in the children's presence. My son's coach also warned all of us parents not to show up drunk to pick our kids up. OK... good thing he gave that warning.

As a kid, I pretty much hated baseball. I dreaded baseball in PE almost as much as I dreaded dodgeball. Standing there with a bat while some kid hurled a baseball toward my head was not something I wanted to be doing. It terrified me. I always stood at the end of the batting line up, and would let the gung-ho kids bat again until the teacher caught on and forced me up there. Thankfully, my kids have not inherited my aversion to baseball. Of course, they are choosing to play, not being forced, which makes a big difference.

Last year, both of my kids were on the same co-ed 8-10 year old team which was very convenient. This year, my daughter moved up onto the 11-13 year old team, and it was quite a step. First of all, many 13 year old boys are giants, and they throw the ball really fast. My daughter got a black eye during her second practice, but brave little soul that she is, she kept playing. That would have most likely scared me right out of the game personally, and I am rather proud of her spirit in continuing. It's been great to see what good sports all of these kids are, and watch them getting better with each game. They cheer each other on, find positive things to say and are generally much nicer than I remember the other kids being when I was one. They have all improved at the game, and best of all, they have fun. The last game they were stealing bases and sliding (or trying to slide anyway.) Very fun to watch and cheer on (while being cautious not to coach from the sidelines. Is yelling “RUN, RUN!” coaching or encouraging? The lines get blurry sometimes.)

With only a few games left for my kids this season, we had a chance to go see the Giants play in San Francisco this last weekend. Even though they lost rather badly, we still had a good time. I thought it was good for the kids to see that these pros who make millions strike out too, and more often than not, they don't make it to base. I think the players did not have a good nights sleep or eat a good breakfast because when they did get a decent hit, they weren't running fast enough to make it to the base before the ball did. My kids' coaches would have told them to “Hustle up!” I found myself occasionally shouting positive encouragement like “Good try!” which probably would have sounded pretty ridiculous to the players if they could have heard me from our far out seats. At least a few other fans looked at me a bit oddly upon hearing “Oh, you almost got it! You'll get the next one!”

We're looking forward to the last few games, and two nights of pizza parties and trophy ceremonies this week. Today, while practicing, my son pegged his sister in the eye with a ball, so she will be ending the season with a black eye as well, poor kid. Maybe baseball won't be her thing, but I sure admire her attitude and determination. It's been a great season.
No comments: Links to this post