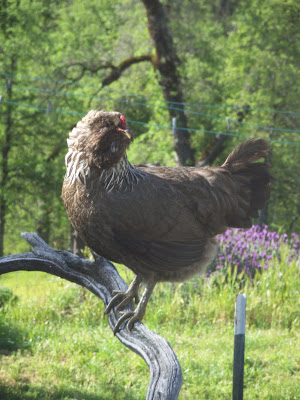 This is the sight I see out my kitchen window as I make my morning coffee. It's Miss Tequila Puffy Cheeks trying to find a way in to join her family for breakfast.
I love this chicken dearly, but she just can't seem to accept the fact that she is a chicken. Maybe that is what endears her to me. It certainly isn't the fact that she refuses to go in the coop with the other chickens, and instead hangs out on the porch napping in the dogs beds, or that she peers in the windows, startling me when I look out, or that she tries to come in the house if we leave a door open. She definitely has more personality than any other chicken I've had, and I've had a LOT of chickens in the last 5 years.
When I come home from a long day in town, I'm greeted at the end of the driveway by two happy dogs, but as soon as I pull in front of the house, I have another fan- Miss Tequila runs full speed at me with what I imagine is a smile on her beak. If you've never seen a chicken run, the stance is similar to the way dinosaurs run in movies, with the head tilted forward aerodynamically. She comes at me with amazing speed, and then stops right in front of me as I open the car door and looks up making a low cluck until I stop and pay attention to her. If I try to just walk by, she'll keep running in front of me until I stop. It's hard to read a chicken, because their faces aren't exactly expressive, but she has a pretty intense way of staring into your eyes like she's trying to hypnotize you into giving her extra grain. She also does a lot with body language, and I'm pretty sure that if she had more of a tail, she would wag it.

Besides the tail, one difference between Miss Tequila and the dogs is that the dogs usually save their super excitement towards me for when I get home, or they hear me say the word "walk" or when I have food. Miss Tequila runs up to me with an adoring look just about every time I walk out the door. And when I don't walk out, half the time I can see her looking in at me someplace. 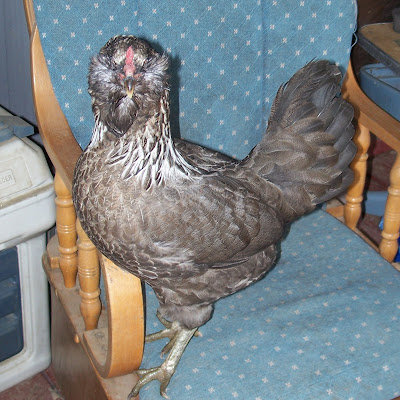 Another big difference between the dogs and this chicken who doesn't think she's a chicken, is that she isn't potty trained. That is not at all endearing of course because as you may well imagine, a chicken on the front porch means chicken poop on the front porch. We've all learned to look carefully before we step, but we've still had a number of accidents. A particularly tragic incident involved Boy Child dribbling his brand new basketball. He was not at all impressed, and had a chicken loathing moment, but he got over it. I realize that there is such a thing as a chicken diaper, and I am actually probably crafty enough to make some, but I've already done my cloth diaper washing days with young humans. I can't seem to muster the enthusiasm for repeating it with a bird. I just rely on the hose, frequently.

We've tried training her to go to the coop with the rest of the chickens, carrying her down there daily. While she seems to enjoy being picked up, as soon as we round the corner near the coop, her entire body stiffens. Sometimes she tries to escape, and other times she just hides her head in a nest box as soon as we put her in, as if she can't bear to look at us or those other chickens. But, no matter how many times I put her in the coop, she never, ever goes there on her own, nor does she stay once the door is opened.

My husband is not as sympathetic nor as bonded with animals as I am and suggests turning the BBQ on and roasting her when she hops onto it as a perch, or literally serving chicken for lunch when she tries to join us at a picnic. He sees her as being stupid for not going in the chicken coop, but I see it as a sign of intelligence. I mean, who would want to hang out in there? I was telling a friend about this chicken who thinks she's a part of the family, and they put a terrible thought in my head. What if reincarnation were real, and Miss Tequila was a former human trapped in a chicken body, and now I keep locking her in a filthy coop? So, I quit trying to force her into socializing with chickens. I do shoo her off the porch, but otherwise I just let her hang out where she pleases.

Of course, I do get pretty frustrated myself when I find her relaxing on my rocker on the porch, but not exactly angry enough to eat her. I'll just have to make sure to keep looking before I step or sit while I'm enjoying the affection from my favorite feathered friend.