As soon as we pulled in to Moab, Utah, I noticed that it  is one of the sportiest little towns that we've seen. Boy Child immediately noticed that almost every vehicle was a four wheel drive, and by the mud all over many of them, they looked as if they had recently been four wheeling. He borrowed my camera and began snapping 12 million pictures of vehicles that his daddy would love.
What I also noticed was that people were in shorts, and after a few very brisk days of Colorado spring (which was a lot like California winter) I was just glad to see that we were in for some warmer weather. I also noticed that the shops and restaurants all along the main street were bustling with people. We hadn't known it at the time, but apparently we managed to land in Moab during"Jeep Safari Week" which apparently is a pretty big deal. Of course, as usual on this trip, we knew where some campgrounds were, but had no reservations and no firm place to stay.
It was late afternoon and a Friday, and by the busy look of things, I suspected that we might have some competition for camp sites. 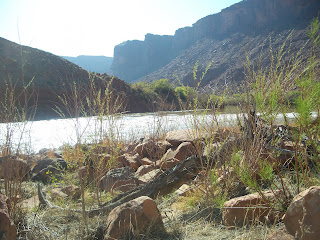 We stopped by the visitors center and borrowed their WIFI while we ate some sandwiches. Free visitor center WIFI was definitely one of the handiest things we encountered on this trip, but in this case, it just told me that the local campgrounds were first come, first served. There were a ton of people asking questions of the staff, so we just grabbed a few brochures and didn't bother getting in line to talk to anyone.

We did learn that it was the start of "Free National Parks Week" which would undoubtedly add another element of challenge to our camp site quest. 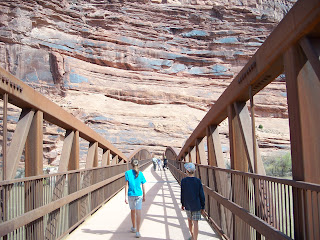 Before heading off in search of a temporary home, we wanted more food. After a few weeks on the road, I had lost many of my usual standards. We ate really well most of the time, as in food that was good both in quality and quantity, which is pretty normal for us. But sometimes, things were definitely NOT along our usual lines. I had fed my children pie for breakfast (it was real fruit at least) and had not only purchased and taken part in the consuming of a massive 44 ounce Dr Pepper, I actually shared it with my kids. None of these things are normal for us, but at this point, daily showers were not always happening either, so what's really the big deal with some corn syrup in the morning? 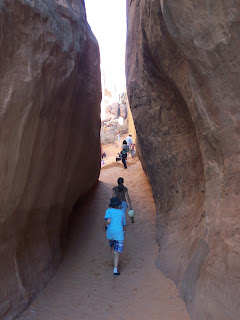 In this case, we actually drove through an embarrassing fast food drive through- a franchise which I have not eaten at in many, many years and am too embarrassed to name, and we drove out eating greasy, meat and bacon-ish products. We then stopped and topped off this junk food fest with ice cream before tackling our camp site search. For a person who usually thinks about things like salt, sugar and fat, I didn't really have any regrets.

There are a string of campgrounds along the Colorado River conveniently located between Arches National Park and Moab. We felt optimistic about finding some place to stay around there. Apparently, so did many of the Jeep enthusiasts because the first five of the campgrounds we saw had "FULL" signs across the entry. I whipped our wagon into the the first one without a sign- sixth or seventh we had driven by- and before I could even park, the host came walking up with the bad news. Luckily he made us an offer that we snapped up. The group site was open, and we could pitch our tent there if we didn't mind sharing the spot. 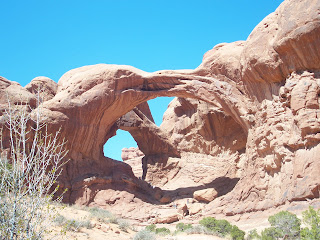 This host took his duties very seriously and have everyone a talking to about 10 pm "quiet time" and no partying etc. That was fine with us, but I found it amusing that we got an extra little lecture about kids safety and respect and not playing ball next to campfires. Maybe the fast food aroma we were emitting gave me a "bad mom" impression? In any case, we loved the stone tables and having the river right by us. The lack of showers was a bummer, and the pit toilets was an even bigger bummer. But as a base to explore Arches, it was perfect. 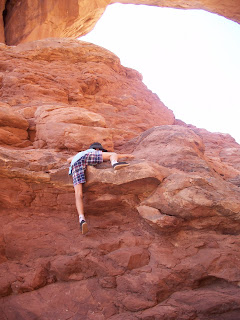 Arches ended up being one of my Boy Child's favorite National Parks, mainly because he could climb, scramble and clamber over all sorts of rocks. Girl Child wondered why the brochure she picked up encouraged us to stand below giant and precariously perched rock formations while we "gaze up and ponder the unlikely balance"- especially since in the same brochure it talked about the several hundred pound chunk of boulder that suddenly and unexpectedly fell off of one of the formations a few years ago. We decided to ponder other things besides falling rock while we gazed up from below. Mostly, we were just in awe of how wonderful and different each park is. 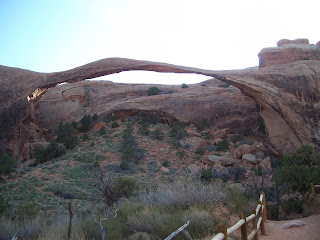 We spent a couple of days doing a lot of hiking, exploring, and admiring the amazing variety of colors and shapes in the landscape. Nature is a magnificent thing.
No comments: Links to this post