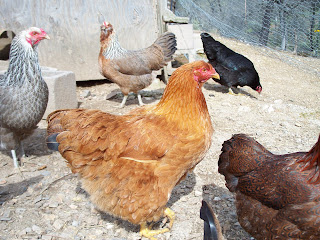 My son has been telling me for a while now that some of our chickens are vicious attack creatures, but I thought he was just being dramatic. We got rid of all the roosters, at least all the ones we knew of. I haven't heard crowing in months, and how mean and scary can a hen really be? I thought my little boy was just making a big deal about it because he didn't like having to feed the chickens and collect the eggs. I can't blame him for not wanting to deal with the birds- they do jump up and get excited when they're hungry, and a chicken coop is gross in any season, but it's particularly mucky in winter. So anyway, I dismissed his slight fear of the birds as a way to avoid unpleasant chicken chores.

Well, yesterday I got a first hand look at how evil those hens can be. 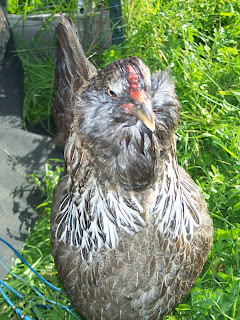 A little background...I have a special chicken named Miss Tequila Puffy Cheeks (no, she does not drink tequila, and I wasn't drinking it when she was named either. It's a long story, but I like the bird.) Anyway, she does not seem to think she is a chicken. She refuses to go to the coop, and instead wanders around looking for people or hanging out with the dogs on the front porch looking in the windows and wondering why she can't come in and enjoy the fire. My husband regularly threatens to let her enjoy the fire by roasting her over it for dinner. He dislikes the bird because she is not potty trained, and has made the unfortunate mistake of wandering into the garage (when my husband, who is the one who is so angry about it, left the door open all day) and pooping on the pool table. She also has a bad habit of pooping on the front porch. This is obviously not something I approve of, nor do I enjoy cleaning the messes, but it's not a capital offense.
So, the other day it was pouring, and Miss Tequila must have been feeling lonely because she did not want to be on any covered area besides the porch. Finally, after moving her 5 times, and having her come right back and poop, I decided to lock her in a big condominium style cage that she often sleeps in. 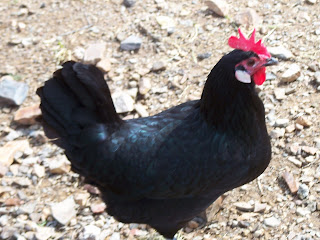 A few hours later, I was trying to feed and put the rest of the animals away, and a chicken named Chuckling (another long story, but basically, she's a chicken who was hatched and raised by a mother duck) would not go to the coop. She was watching Miss Tequila eat, and trying to find a way in to get some of that food. Well, it started to thunder and I was standing in the rain in leaky boots, and I got tired of trying to lure a crazy skittish chicken who was ignoring me. I didn't want to leave her out all night for the coyotes, so I just opened the door to Miss Tequila's condo and threw in some more corn. Chuckling hopped right in, I put everyone else away and headed in to dry off.

Well, the next morning, I kind of forgot that I had locked them in together, and didn't let them out until 9:00ish. That's when I discovered that evil Chuckling had viciously attacked Miss Tequila, plucking out feathers and making her comb bleed. My daughter, who loves animals, was furious at the unprovoked attack, and chased Chuckling down the hill to give her a scolding. We cleaned the wounds and applied some antibiotic ointment. It was pretty gross, but Miss Tequila was a trooper and afterward, we gave her a large serving of her favorite foods. Then, we created another condo for her in a sunny spot near the garden, as her main condo is a little shady in the mornings. We had to leave for town, and although my dogs are usually good about not harassing chickens, I was afraid a chicken with a bloody head wound who hops in the dogs bed might be a little too tempting. So, Miss Tequila was set up in style, and is recovering well. Animals are amazingly hard core about injuries. If any human I know had chunks of their forehead and neck pecked off, we'd certainly be laid up in bed moaning about the pain. She's out in the grass right now eating bugs and acting like nothing happened.

Now I've seen the light- my son was right that some of my chickens can indeed be evil. Maybe that's why Tequila never wants to go in the coop- the other chickens pick on her. It kind of reminds me of how some school children can be with bullying and picking on people who are different. Thankfully, she's OK, and I won't be forcing her to hang around with those mean hens again. As for the bully- I gave her and the rest of the hens a warning. Bad attitudes on this farm will get you a ticket to the stew pot.
13 comments: