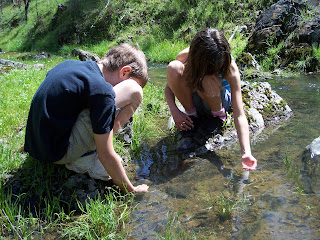 Every year about this time, we do a massive tadpole rescue operation. The creek that borders our property flows seasonally- it goes from raging in the winter to mostly dry with the exception of a few puddles in the summer. We are down there a lot in the spring admiring all the new life, and while we catch and observe them for a few minutes, we don't take them from their home.
I've had other kids think I'm a big meanie for making them leave tadpoles in their creek home, but I figure if it has enough water to sustain them, that's where they should be- squiggling free. But, at some point when the rains stop for the season, you pretty much know that the tadpoles who still have tails but no legs are not likely to finish developing in time to hop away before the watery home dries up altogether. 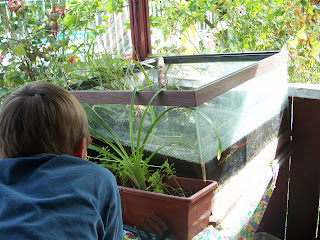 I'm a big softy when it comes to animals, especially young ones, and the thought of dried up tadpoles disturbs me more than captive ones. So for the last few years, each spring when there is not much chance they'll make it otherwise, we head out with buckets and retrieve as many as we can. We have a big aquarium that we set up on our front porch for just this purpose. It has rocks and plants from the creek, and is open on the top with branches to help them climb / hop out to freedom when they're ready.
In years past, we've also had water skimmers make the habitat their home, as well as a few mosquito larvae (I catch and feed the mosquito larvae to chickens- I have no mercy or soft spot for them.)

This year, we had a horrid new bug stop by to eat at the habitat. It was a back swimmer, a true bug with a piercing mouth that is used both to suck plant juices, and to inject digestive juices into prey (such as tadpoles.) These nasty creatures can both fly and swim (they swim upside down, hence the name.) We had a handful get in our human swimming pool last year- they use their hideous mouth to bite humans too and it hurts, probably because of the digestive juices, which is just really creepy to think about.
Well, I was out observing my cute little tadpoles, and the tiny little frogs in our porch habitat, when I saw a most traumatizing site. One of those evil back swimmers was under water, upside down- it had it's disgusting mouth latched onto a cute little frog and was pulling it under! It was awful! I think I probably screamed something like "Oh my gosh you evil demon creature- what are you doing?!?" and quickly grabbed a nearby cup that one of my children had left on the porch. I scooped up the attacker and his victim, who were firmly attached, and yelled for my children. I'm not sure that I really thought through why on earth they should witness this disturbing scene, but they heard me and came running. We all hollered about the brutality of nature for a minute, and then tried to save the poor little frog, but sadly, it was too late for him. Nevertheless, we promptly smashed the awful back swimmer before he could find another victim or reproduce any more of his terrible kind. Again, no soft spot here. 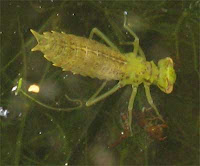 Later the same day, we had another interesting encounter with nature. My Boy Child was scooping cupfuls of our habitat water and checking out what was in it up close when he came across another rather ugly insect near the bottom. I almost judged it based on it's ugliness, but then I thought it looked a little familiar, like it was possibly a dragonfly nymph. We looked it up in the Handbook of Nature Study, and sure enough, it was a little dragonfly in the making. Now, for another dilemma...apparently this little fellow is also a voracious predator too. Its one thing to know that he's ugly as sin right now, but will someday be a beautiful dragonfly, and it's another to know that he too is probably going to eat a bunch of our tadpoles along the way.

We kept him in a cup for a few hours while we decided. First, we read a bunch. On the plus side, we all enjoy the sight of dragonflies gracefully skimming through the air on summer evenings, and once they take wing, they eat other flying insects like mosquitoes by the dozen. They also eat mosquito larvae in the water while in the nymph stage which is another bonus. But, they aren't particular diners, so there's a good chance he'd also eat some of our our little legless frogs to be as well. They can also take years to get to the flight stage, and there was no way I'm keeping this tank habitat up for years. We looked for another body of water that might support him- preferably one that was full of mosquito larvae. Unbelievably, we couldn't find anyplace that looked like he could live there.

None of us felt right about dumping him, and since we hadn't seen him in the act of killing as we had with evil back swimmer, we certainly didn't feel he deserved a direct death sentence. We didn't really like the idea of him munching our tadpoles, but in the end, we decided that we'd take the risk. We did have about 12 million tadpoles in the tank, so a few might be sacrificial ones for our dragonfly. One nice thing is that dragonfly nymphs are bottom dwellers, so we wouldn't need to look at his ugliness or the carnage of his feeding. 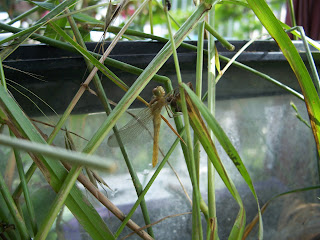 Well, maybe a week later, I was out observing again, and I saw this little guy hiding in the grass. Our little nymph had just completed his transformation to his new dragonfly form- his wings weren't even dry yet, and his empty nymph shell was still right there next to him. It was very neat for the kids to see. We spotted another empty nymph shell in the grass, and later, found another nymph in the water. Apparently, we had more than one dragonfly, which was very cool. We also still have 12 million tadpoles, so we don't feel bad about the possibility that a few were snacked on either.
We're starting to get more and more little frogs every day. I have a feeling it's going to be a noisy summer around here.