A while back, we saw a science experiment from the Happy Scientist involving bean power and the process of osmosis. My son thinks the idea of bean power is hilarious, so we had to finally try it. We definitely got some unexpected results.

The experiment was simple. We filled a glass mason jar with dry beans to the top, and then added water. As the beans absorbed the water, they would swell and pop out of the open top onto a pie tin below demonstrating the way the cells in the beans absorb the water (the process of osmosis) and swell to almost twice their original size. It was going fine, beans were swelling, popping out and making occasional "ping" sounds. We thought that was kind of neat, and then we went on about our day while the beans continued to absorb the water. Then, we heard a small "crrrrrrick" sound. 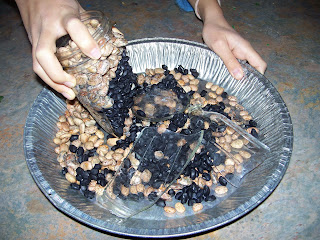 I can't believe the power of swelling beans actually cracked the jar! (That wasn't in the plan- after the experiment, we were supposed to have the beans for dinner.) But it did break it, and not just a little bit- the whole glass was broken into large shards. It wasn't a brand new jar, but it was thick glass without any chips, and the same kind used for pressure canning. I just think that's amazing that a few cups of beans could do that. 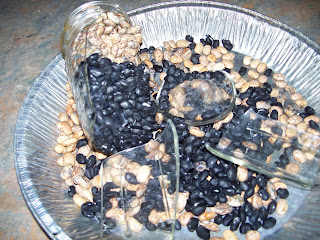 While it looked like the glass was just in a few large pieces, I decided not to chance accidentally feeding my family bits of broken glass, so we tossed the whole thing. I was even too paranoid to feed it to the chickens. It was a bummer about the wasted beans, but a pretty impressive look at the strength of my menu items.I think we ended up having cereal to eat.

Sometimes science experiments don't go as planned or we have no idea what happened (OK, often at our house) but we enjoy the process of exploring, experimenting, and observing. And the unexpected results give us plenty to think about.
4 comments: Links to this post