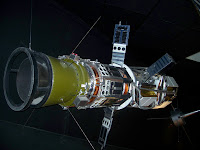 Apparently, New Mexico is a hot spot as far as the history of space projects, and the Museum of Space History in Alamagordo is a great place to go learn about it all. The museum and its grounds are full of replicas and actual models of all kinds of space crafts from around the world that range from the earliest days of space exploration to current models. 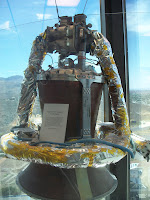 It was amazing how many of these machines, that I am assuming are very complicated, and for the most part successfully manage to perform amazing feats like flying through space, yet they look like one of the many inventions my Boy Child has put together and are strewn all over my yard, except he uses a lot more duct tape than NASA.

In addition to all kinds of space craft, they have space food, astronaut / cosmonaut info and my personal favorite- an exhibit on the chimps who traveled in space. In fact, Ham, who was the world's first astro-chimp, is buried right there on the premises, so of course, we went and paid our respects. 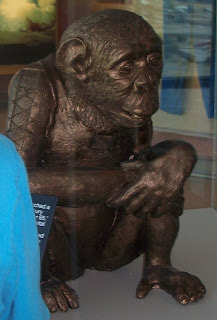 Girl Child is very sensitive to injustice in the world, and anything that involves cruelty to animals will get her hackles up in a hurry. We were all glad to learn that neither Ham nor his two training buddies were hurt or died in the process. The same can not be said for the poor little Soviet dog who went into space before them.

While three chimps were trained, only Ham actually went into space, and in a very cute little space suit I might add, and after flying at some ridiculously fast speed, he landed, and was recovered.

I wonder what was going through his head as he was zooming through space in that little capsule. Did they have him drugged so he didn't freak out? Maybe he was just a really easy going chimp. In any case, he made it back OK, which proved that people had a chance at space flight as well. They retired Ham after that ride to a zoo where he lived a long life for a chimp, and passed away at the ripe old age of 27. We were all glad to see the recognition of Ham and his contribution to space flight (even though he technically didn't sign up for it, and didn't have much say in the matter.) 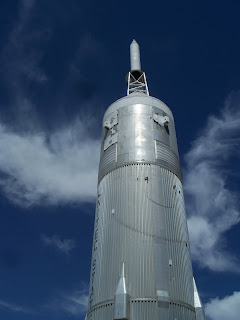 Part way through our tour, a very large group of excited children bombarded the museum- like three busloads. I like kids a lot, but in those numbers, things tend to get a little loud and crazy, and it's really hard to focus or appreciate things at a mellow pace. Nevertheless, we enjoyed our few hours of immersion into space history, and were able to learn a few things about rockets, satellites, missiles, astronauts, chimps and more, all while staying a few exhibits ahead of the large, loud group most of the time.

My kids and I were all amazed at the minds that go in to creating machines that will fly into space, and at the people who are brave enough to fly them. Even my Boy Child, who is pretty much a dare devil, wasn't sure he would go on one of those missions. The space food and gravity free restroom facilities didn't help sell any of us on the idea. Scientific minds are incredible, indeed, as are the adventurous souls who fly off into the unknown.

While I don't see myself ever lining up to fly off in a space ship, I am glad that we took off on this little journey of ours into the unknown. Discovering new places and seeing new things and very old things that just new to us has been amazing.
2 comments: