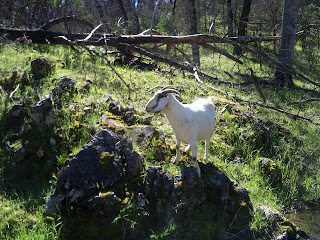 Most of the time, I love my goats, but some days, I have a strong urge to call them names that I would not print here on this family friendly blog of mine. Goats are mischievous creatures by nature, and to some degree it adds to their appeal. I think that most people who have not spent time with goats would be surprised at the amount of personality they have. Some goats are actually comparable to dogs in that respect. I've raised sheep as well, but in my experience, they were much more skittish, much less intelligent, and far less interested in interacting with humans. My sheep were also semi frequent targets of our local coyotes, and finding the remains of your pet first thing in the morning was very disturbing for both  children and adults. So, we decided to stick with goats. 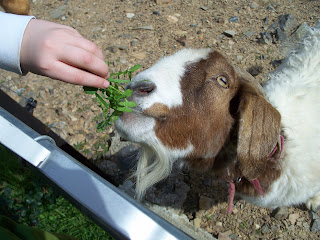 Why do I even have goats? I don't milk them because that is a really big commitment which I am not feeling like I want to sign up for. I like some mild goat cheeses, but my husband says that chevre tastes like a goat smells. I don't raise them for meat either. We've tried eating goat meat in the past, but it just wasn't really that tasty to me. Besides, the goats I have now are too old to eat and would probably be stringy and gross. Plus, I do like them most of the time, and I have a thing about not eating animals that I personally like. 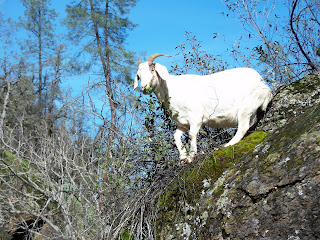 We got our first goats when our human kids were tiny and we lived in some very poison oak covered mountains. Since I'm highly allergic to poison oak, and I pretty much was always getting it, we enlisted the help of a few baby goats to eat back the overgrowth. We named them Gretta and Ingmar (my husband had for some reason wanted to name one of his sons Ingmar, but I decided that by giving the name to a goat, I could get out of that idea.) They were tiny and playful and adorable. They had to be bottle fed, which I can tell you is a big pain in the butt, and really made me glad I just breastfed my human kids. Sadly, Ingmar was eaten by a mountain lion, but that is another long story in itself. 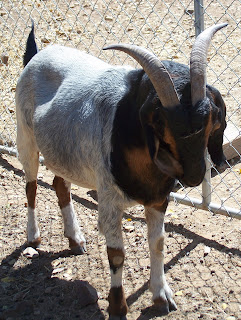 We've moved to a much less poison oak covered property since, but the land around us is steep and very dry in the summer. Goats are amazing at mowing the rocky hillsides and keeping the fire danger down. Our herd has grown, then shrank, and over all changed. Now we are down to 4 goats that we like- well the kids and I like 3 of them and dear husband says he likes the other one, but I can't imagine why. We still have Gretta who is a short, plump and sweet old lady who gets a beautiful full coat every winter that I really should brush out and make into yarn, but I never have. SweetPea is wonderful to humans, and was a great mother who nursed her triplets like it was nothing, but does not like dogs and will chase them down. Noah is a wether (neutered male) who is really tall and has huge horns, but is so sweet and has potential as a pack goat if I was ever on the ball enough to train him. The last goat is Abby who has a bad attitude and seems to have mental problems. She always looks angry and frequently has raised hair down her spine while she sharpens her horns on any nearby tree. It is not at all endearing or cute, and I'm hoping I've convinced my husband that the herd will be better off without her. 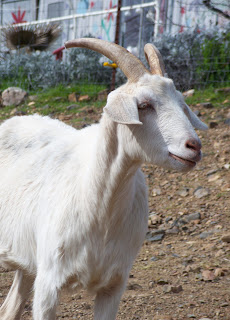 We often take our goats hiking in the hills around us. We picnic and read while they graze and try to steal our books and snacks. Those are the times we really enjoy our herd. Then, there are the times when they discover a weak spot in the hot wire fence and decide to climb it and eat most of our fruit trees. Those are followed by the times when they rub their horns on a water pipe and turn it on causing our well to drain. Chasing goats who are destroying expensive trees that you have babied for years in hopes of someday having your own fruit tends to make one a bit angry. When it happens in 95 degree whether, and I get all hot and stinky, and then find out I can't take a shower because they drained all my water, it's not easy to restrain myself from loud and ugly outbursts. When I have to immediately take my hot and stinky un-showered goat smelling self to my crowded Interpersonal Communication class, then I become bitter, which is where I was earlier this week. 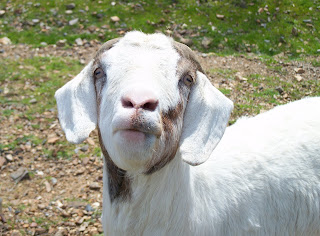 The morning after this unpleasant incident, I had my Boy Child let the goats out and feed them as I was still holding a grudge. But later, when I went outside to do something else, there they were, maaahing their hellos and trying to look cute. At first I just flared my nostrils, glared and went on about my business. They followed me along the fence line wagging their tails like dogs and trying to get my attention. Maybe they just wanted more grain, but I imagined they wanted my forgiveness too (especially since I am the one who buys the grain, and who probably gives them most back scratching and attention.) Luckily for them, it's hard to be mad at cute things. Plus, I had been able to shower at the health club, so I no longer smelled like stinkin' goats and my water tank was slowly filling back up. I gave in and scratched their heads over the fence. They're on my good side again, for now at least. I just hope they don't have any more fence breaking, landscape destroying, well draining mischief in the near future.
3 comments: