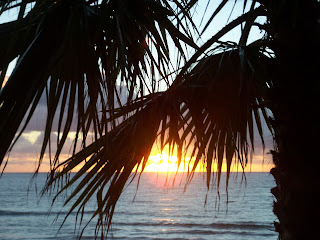 How was our recent family vacation? I don't think I've ever had a vacation quite like it. I mean, other than the infectious diseases and germs from around the world, it was good, but spreading illnesses tend to take a bit away from family fun.

We are generally healthy, and since I like it that way, I tend to be a bit of a germ freak. I'm not so worried about a spotless house or my kids getting dirty in actual dirt, but I do tend to shy away from people who are have any abnormal amount of mucous, even if I love those people. Whether it be a runny nose, cough or sneezing, I don't want any part of the droplets, spray, or residue on everything they touch. Any surfaces that have been touched by the general public really gross me out, and I go to great lengths to avoid touching doors, handles etc. I may not be a good housekeeper, but I'm very big on hand washing.

Anyway, a few days before we left for our family trip, I learned that my nieces we were going to see both had colds which included a hacking cough. I was bummed for the poor little things, and a tad paranoid too. Particularly as an asthmatic, I try to any extra avoid any added lung issues, but I love those girls, and we only get to see them a couple of times a year, so I figured we'd just up our vitamin C intake and go heavy on the hand sanitizer.

By the time we got into town, my nieces were on the mend, but now my brother was sick. Apparently, it was pretty bad as he was banished from coming over to the little beach condo where my kids and I were staying with my Dad, his wife, and my sister.We decided to delay the slumber party at my brothers house, but had the girls over to play and visit. 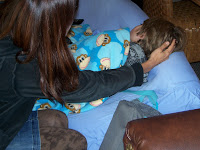 The next day, my Boy Child was not feeling so well. He had a headache for a while, and out of the blue made a run for the kitchen sink where he suddenly lost his supper (as well as spoiling the clean dishes lying on the rack.) None of the other sickos in the family had any nausea or vomiting, just mucous, so I initially suspected he ate something funky on the train. While I debated whether the cream cheese on the bagel was bad or not, we bundled up Boy Child, set him up with a bucket, and tried to help him get some rest. The next day was a beautiful day at the beach, and we observed it from the window of our condo since Boy Child was weak from a night full of illness. 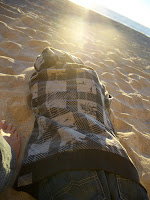 There were of course lots of things we would've loved to have gone and done while in sunny southern California, but leaving Mr. Sicky was out of the question, and he wasn't exactly up for running around. Abuelita rented us some movies, and we lounged. Finally, I decided that Boy Child needed fresh ocean air, and while we could see the beach from our balcony, the shade made it too cold for a sick kid to enjoy. So I made some tea to go, bundled him and up and we slowly walked the short distance down to the sand. He laid down and soaked up the warmth of the sun for a bit while I read aloud and watched the waves. Then, it was like a miracle. I think the sun and ocean air really did help because in a short time, he was up and acting like himself, only operating at a slightly slower than usual speed. 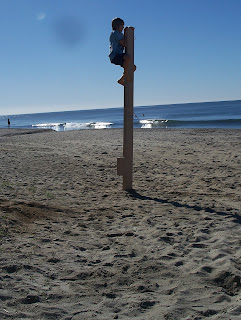 He was playing and climbing poles in no time. The illness seemed to leave almost as quickly as it came on, and I was still chalking it up to some kind of food public transportation food poisoning.

We all felt like the sickness was behind us, and we could go one with enjoying our vacation. My brother was feeling better too, so we planned a big family dinner.At some point during the preparations, my sister managed to throw her back out, but it was still a lovely get together with good food and good people.

Late in the night though, my sister got sick. By the wee hours of the morning, my Girl Child was as well. At this point, I knew it wasn't food. Who knows, it was probably something disgusting virus he picked up on some surface at the train station, and spread around. You see? That is exactly why I hate touching things! Anyway, I had been worried about catching the cough from my nieces, but we seemed to manage to catch our own special illness, and bring it to share. I am just so glad that we didn't share it with them, or my new baby nephew. 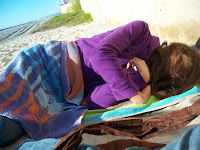 More plans were canceled, and more movies were rented. Lots more lounging took place. I decided since the sunshine and beach air helped Boy Child so much, that I'd try it on Girl Child. So, we took her for a nap on the sand. 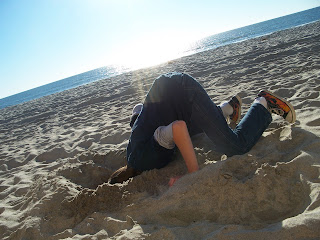 Boy Child was seemingly completely recovered at this point, and digging holes in the sand. Girl Child probably would have found this very amusing if she hadn't been so ill. We were supposed to leave for home that evening, but I postponed it. Girl Child was definitely on the mend, but I didn't want to chance it.

Well, I was very glad that I made that choice because late that night, Boy Child had a relapse. He didn't actually get sick, but he felt like he was going to, and he looked like it too. I had been fighting a bit of a headache myself, but in complete denial that I too could get sick. Well, at some point after midnight, I could deny it no longer- I had to steal the bucket from my kid because I very suddenly needed it myself.

Now this was just lame. First, spending my beach vacation tending for rotating people with chills, shakes and fevers, who also happen to be vomiting, and now I was joining the sick crowd. Super lame. The good thing was that it passed quickly. 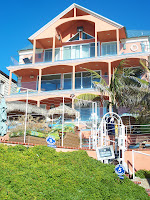 I treated myself to the same sunshine and beach air cure, and it really did help. As I regained strength, we took a stroll down the beach, and chatted with Girl Child about the healing ways of nature. She suggested we move here, particularly to a house on the beach like this. Well, at least she has good taste.

That night we were well enough to travel, and felt we had more than over-extended our welcome, having turned the vacation condo into a hospital sick ward and all. We caught a late night train to make our long way home. 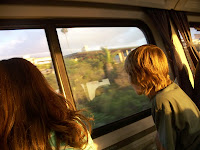 It would be pretty easy to focus on the disappointing nature of this trip. Traveling 1400 miles round trip to share the flu is a bit of a bummer, but there were bright sides too. We got to meet my new nephew, and we didn't get him sick. We got to see lots of other family, to enjoy the beach, and to watch about 2 months worth of movies too. We also had fun train rides. Overall, the adventure was worth it. It can't all be fun and games, but we are hoping our next trip is at least without infectious diseases.
2 comments: