Amoebas, Pinworms, and Other Parasites I Don't Recommend Studying

There's nothing like a wonder filled conversation about parasites to freak out an entire family. I have a tendency toward freaking about certain things anyway, and things that suck the life out of people, like bacteria, viruses, and most certainly parasites, are high on my list of freak worthy things. 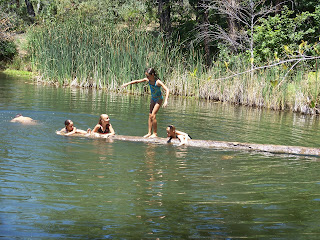 So, when a friend told me that she didn't let her family swim in lake waters of Texas because there were brain eating amoebas, I was a little disturbed to say the least. I had never heard of such a thing, and to tell the truth, it sounds a little a bad sci-fiction movie. On the other hand, you never know...and my family swims in lake waters all the time, not in Texas, but still, what if the amoebas migrated in someone's dirty swim trunks, and ended up in a lake near us?
To make it worse, my kids heard the conversation, and when we got home, they began asking questions. They were a little concerned as well about the prospect of little critters that crawl up your nose to feast on your brain tissue, so I thought I could comfort them with the truth. Like any good homeschooling family, we got busy with research, starting of course with the internet.

Well, let me tell you, there are a lot of different parasites out there, and there is a whole lot of information on them as well- including numerous magnified pictures of the nasty little things! I thought about including some, but decided that I didn't want to do that to other people, as images of parasites are truly mind scarring, and could result in the need for some sort of therapy to remove. For those of you who are curious and want to go investigate for yourselves, I am providing a disclaimer right here- it may be frightening and disgusting, and you may never be the same. I don't recommend it, and I can't be held responsible if you just have to check it out.

As for the parasites themselves, according to many sites (who happen to sell herbal anti-parasitic medications) the little wigglers are prevalent in humans worldwide, even in developed countries like the United States. Beyond amoebas, there are worms and flukes. Some are more common than others, but they all are incredibly freaky.

I tried to focus on research based information from professional medical organizations, to weed out the sales pitches, but even that didn't calm the sense of dread. Thankfully, we have one thing in our favor- we wash our hands a lot. Yet in the face of the reality that these horrid little species have been finding ways to suck the life out of other creatures since the beginning of time, and that they mutate to find new ways to survive, are good hand washing skills enough? We could still be parasite candidates on a number of levels. We have not only dogs and cats, but also goats and chickens, and we interact with them, up close and personal, on a very regular basis. We pet them, clean up after them, and come into contact with their messes more often than I like! We walk barefoot at the creek! We travel, including to foreign countries, and we swim in lakes! We play in the dirt and garden with our bare hands! We drink well water! Good grief, the list goes on and on...

We could be infected and not even know it, too! Side effects can include insomnia, (I'm sleepless) moodiness, (yep) and upset stomach (mine hurts just thinking about this.) My kids have inherited my hypochondriac ability to read things into every symptom- we're like a bunch of medical students convinced we have every bizarre new ailment we read about. They became paranoid too, linking everything to the possibility of parasites. The confirmation of parasites however, involves procedures none of us wanted to consider. The kids did learn that there are many careers in the medical field that they do not wish to pursue though. I suppose it's a good thing that someone decided to go to college in order to identify these unpleasant things so they can be treated, but none of us feels drawn to helping mankind in that particular way.

The kids wondered if we should stop swimming in the lake, even though having lakes nearby is one of the things that makes living in a blazing hot summer climate bearable. So, we talked statistics, and did some estimating of our own. It's always good to be cautious, but the probability of amoeba infection is probably slim. Public pools and water parks have their own gross dangers. We swim lots of places too, and in fact could also get attacked by a shark or an alligator, or even a killer jellyfish. Knowing these dangers exist as well isn't exactly reassuring- actually, it just gives us more to worry about. But the reality is that none of these things is very likely to happen- sure they could, but they probably won't. If we knew a body of water was infected, whether it be full of sharks or amoebas, we'd skip it, but I don't want to skip having fun and enjoying exploring the rest of the world because of it. There are a lot of random what ifs, and possible dangers in the world, but there are also a lot of wonderful experiences to be had. I guess we just have to decide what the risks are to things, and whether the benefits are worth it. We'll still swim in our lakes, but I think my kids will be keeping the water out of their mouths now that they've seen what might might be in it.

For now, I've decided to just halt our little unit study on parasites. There are some things we just don't need to know any more about, and overall, the more we learned, the more it freaked us all out. I think we'll be happier if we're learning and enjoying the world (in a safe way) rather than feeding our fearfulness. We might be washing our hands a little more often though.