Sing Song Story of the World

A few years ago, someone loaned me a copy of the first volume in Susan Wise Bauer's "Story of the World

" series. She uses a "story based" approach to introducing historical periods, which I thought was a lot more fun than a boring textbook. I wouldn't exactly say that I have a "classical child" which the subtitle states this is history for, but I do have a couple of story lovers, so they both enjoyed this approach as well.
Our family loves tie in activities too, so I not only kept the borrowed book for ages, I also got the corresponding activity book

to go with it. There are about 14 times more activities listed for each chapter than I could possibly imagine doing, but perhaps someone more organized than me might actually accomplish all of them with their kids. I like to have a lot to choose from in any case, so I appreciated the offerings that ranged from maps to coloring to crafts to cooking. We've only done a fraction of the offerings, but have had fun with the ones we've tried.

A while later, while lamenting curriculum purchases that we never finish with a group of other relaxed homeschooling moms like myself (meaning we are relaxed as far as curriculum, not necessarily as far as all other things in life, but anyway...) another friend mentioned that she had the CDs

for several volumes in the Story of the World series

. She talked up the way her kids could listen in the car or in beds, while she was busy doing something other than reading. Well we love audio books, and I was very excited to hear about this option. I mentioned this, but unfortunately, she did not offer to loan them to me- probably because she heard that I had borrowed the book for so long.

Oh well. I am resourceful, and I was able to find a copy of the second volume on CD

"The Middle Ages" in a homeschool lending library (which has very long check out periods and no late fees, both of which work really well for me.) So we snatched it up, and I ordered the activity book for it as well.

Well, we're enjoying the stories in the second volume, but I do have to say that this is one case where both

my kids and I preferred my reading the books aloud over listening to them on the CDs. When listening to a story, the experience really comes down to the narrator and whether or not they have your attention. In this case, the narrator sounds like a very nice lady, but has one of those patronizing preschool teacher kind of voices. I feel a little like she's talking down to me the whole time. There's just something about condescending tones, that are also found in many "educational" videos, just don't really do it for me or my kids.

I wonder why people feel the need to use a "you're not smart enough for this so I'm going to really enunciate, smile a lot, and use small words" voice with kids? Personally, I have never been one to talk in those tones or dumb down conversations with my own kids, so they tend to be baffled when other people share educational facts in a very happy sing song voice, at the slowest speed possible.

With videos and CDs, they just roll their eyes, and sometimes start doing impersonations throughout the day. "Mother..." (pause for 10 seconds with scary smile) ..."I'm going to do my chores now. Chores are household jobs that helpful children perform." With real life humans, they are polite enough not to roll their eyes, but I can tell it annoys the heck out of them.

So, again, while we liked the stories, we couldn't quite figure out what my friend was so excited about with the audio versions. I mean, we were amused when at one point in story of Beowulf, the narrator exclaims in a perfect remedial educator voice "Beowulf ripped off their arms, and caused them great harm." While it gave us a good laugh, I still wasn't hooked. Then, I realized that the version I acquired is not the same one she has. 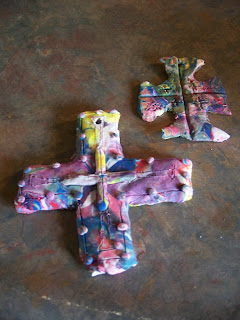 Apparently, I have the singsong version of Story of the World

and she has the version that is narrated by Jim Weiss! Now, we've heard fabulous tales told by this fellow, and I am quite sure his version would be much more up my alley. But, probably due to my "long borrowing" history, my friend has still not offered to loan me her CDs, and the lending library isn't purchasing new copies. I'm just glad I borrowed this one instead of purchasing it myself.

We'll still finish the volume, as we do like the stories, but when we move on to the next volumes

, I'll be on the look out for the least sing song version possible. If I don't find those, we'll stick with the paper book versions and go back to the tried and true method of my reading aloud. In any case, we are still enjoying the series, the stories, and the activities that go along with them.

I'd love to hear about other fun history sources your family is using. What have you enjoyed....or not enjoyed?
5 comments: