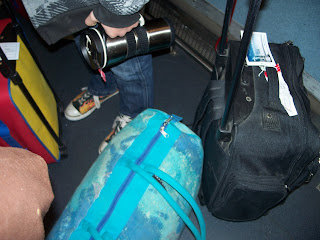 I must say, the train is a fabulous way to travel with kids. We boarded the San Joaquin in old Sacramento a little before 6:00 AM. Now, there is not much that I do before 6:00 AM ever, other than possibly drink coffee, but we wanted to get to our destination in the other side of California by dinner time, so we woke to an obnoxious hotel alarm at 5:00, took super quick wake up showers, got dressed, and headed to the nearby station. It was so early that the free continental breakfast at the hotel wasn't even open yet, not that I was very hungry, but I could have used a little coffee. I'm a French press user myself, and am pretty inept with hotel coffee makers, so I didn't make my own freeze dried cup in the room. I'm pretty sure it was bad coffee anyway. 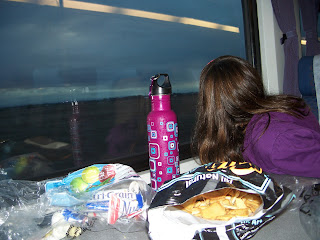 In any case, we found close by long term parking and in our groggy state managed to figure out the machine that makes you pre-pay for your parking. We entered the station, found the other machine where I could print our tickets using the bar code Amtrak emailed me when I made my reservation. Easy peasy - even on limited function, early morning, non caffeinated brain cells. Within minutes we were boarding the train, and were very happy with the seating options. The conductors actually yelled "All Aboard" just before we took off.

The train cars had roomy seats, and we scored a set of 4 that faced each other with a big table in between- perfect for snacking, games, and hanging out. We spread out and settled in right away. 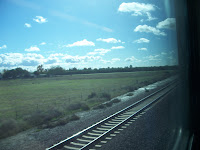 Out came the snacks, and we watched the sun rise while we waited for the cafe car to open so I could get my caffeine fix. When it did open, I was pleasantly surprised  on a number of levels. First, the coffee was actually decent, and the prices weren't bad either. It wasn't gourmet organic eats, but it certainly was better than I expected, and we made several snack runs. 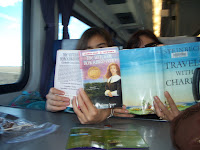 One of the best parts about train travel was that I could relax so much more than I could have behind the wheel of the car. We played games, read, ate, laughed, napped, and explored every car. My kids hoped for a nice lady selling sweets from a cart a la Hogwarts Express, but we made do with tea, bagels and cinnamon rolls from the cafe car. 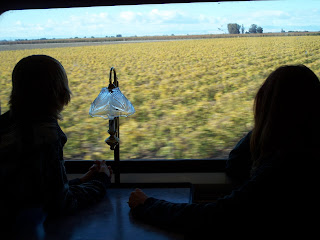 The train bounces all over the place so everyone walking down the aisles is wobbling and running into seats like they've been drinking, and we had sea legs for a bit when we got off, but boy, it is wonderful not to have to sit buckled in the entire time. The connecting spaces between train cars seems slightly on the dangerous side- as if you could get your foot caught and chopped off, but no one did, so all was well.

My kids are are at such an awesome age for travel. They can explore a little without me, they aren't all crying and wanking and dropping food- it really is a pleasure. Girl Child took dozens of pictures, wrote in her journal and mapped out all of our transfers on the brochure keeping track of how far along we were. Did I mention you could even plug in a laptop and work or watch movies? Awesome, awesome, awesome way to travel. 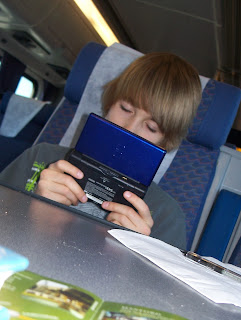 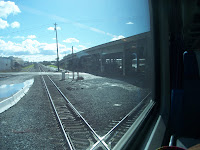 Another little tid-bit on train travel- you see parts of America that you wouldn't necessarily see from your car- like the homeless shanties under bridges- not just an occasional cardboard shack and shopping cart, but rusted metal shelters with clotheslines and kids toys. The view would change rapidly from orchards and vineyards to what looked like a third world country. It's not the most pleasant thing, but I do consider seeing poverty to be an overall good thing, especially for kids, and to see that it exists on a big level right here in our own state. Puts a different spin on not getting the video game you want.

Aside from shanties, we saw a whole lotta garbage. 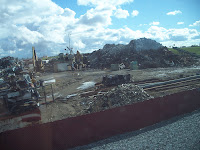 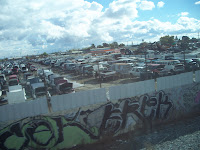 Whew- these places made me feel a whole heck of a lot better about my Dear Husbands collection of good stuff.

Thankfully, the farmlands and fall colors were also a big part of the landscape too. 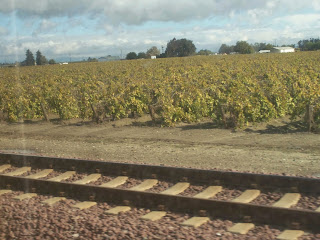 At the end of the line for our train, we hopped an Amtrak bus to Los Angeles. The bus wasn't nearly as nice as the train, especially since we took the only 3 seats together, which were located near the stinky restroom, but it was only abut an hour and a half. The driver was a character who did an interesting jiggling of his dreads while giving a sassy safety lecture. 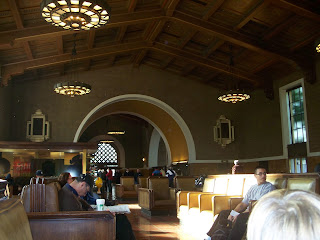 Our stop in LA was Union Station- which was kind of fancy schmancy with the old time art deco scene, including big, wide leather seats and cool murals. Of course, it had a coating of modern grub, but the architecture gave a sense of a time when travel was elegant.

Girl Child managed to set down and walk off without one of the bags she was carrying- the one that had all of our personal items in it. When I noticed she was a bag shy, we backtracked in a panic. Fortunately, some Amtrak staff who had seen our unattended bag also saw our freaked out faces, and realized we were the bags owners. Thank goodness for honest people- they were leaving a message on my cell as we ran up- they had found the number off the luggage tag. Once we had all our bags in hand, we rested in the big lounge chairs for a few minutes before hopping a commuter train for our last leg of the trip. 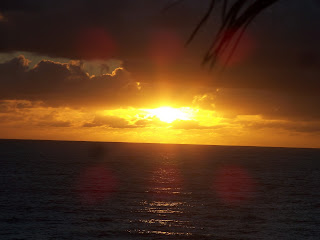 We were so happy to see the beautiful Pacific Ocean before the sunset, and to see Abuelito at the train station to meet us when we arrived.

Travel is always full of new things to see and learn, and we had a great time looking around and learning on this journey. I think the train trip took a tad longer than if I had driven, and the 3 tickets costs a tiny bit more than my gas would have, but the ability to avoid traffic, move around, and kick back, and put my feet up leisurely style made it well worth it. Plus, no airline pat downs or x-rays.

Hitting the rails on a trip across California was a lovely reintroduction to traveling by the tracks for us. We'll definitely travel via railroad again, maybe someday in the future we'll take a multi day trip with sleeper car, or maybe a bullet train in some exotic land. Have you taken any trips you'd recommend by train? I'd love to hear ideas and suggestions to add to my long list of "maybe someday..."