Back in January, I chose the word "Explore" for my word of the year, and since we're two months into 2012, it's probably time to evaluate and see if I'm going anywhere with it.

So far, my exploring has been mostly been focused on art, writing, and money money schemes that don't include having a regular full time job (all completely legal and morally responsible, of course) I just finished a mini little art project from the folks over at the Art House Co op in Brooklyn- the same folks who inspired me to do the Traveling Sketchbook Project in January.

This current project was called "The Meal" and the idea was that people all over the globe get together at the same time to share a meal from wherever they are, and then take a picture of themselves, and their meal. The Art House people will then create an exhibition of the "global snack" photos. 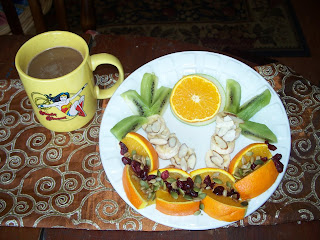 The set time was noon in New York, but 3 hours earlier where I was. 9 AM isn't exactly early for me, but let's just say I prefer to avoid public appearances in the morning, and that includes photos. Timeliness isn't my strong point anyway.

Well, every time I tried shooting the photo with myself in it, I somehow captured that unsightly inner arm view- you know, the pale, wobbly, and very unflattering one that proves I should probably start some sort of upper body strength training before my arm flaps accidentally whack someone when they're flopping around unrestrained. It was very disturbing, indeed.

Anyway, we do a lot of reciprocal homeschooling around here, meaning the kids teach me as well as my teaching them. My amazing Girl Child taught me to use the timer on the camera so I could avoid the arm angle, and still get myself smiling with my meal. But by this time, I had cold coffee and low blood sugar grumpiness and still hadn't eaten. Ahhh- the things we endure for art!


Due to my hunger and caffeine withdrawals, my smile looked forced, and rather scary, and in the end, I still liked the photo of just the food. At least it was yummy when I finally got to eat it.

What creative endeavors are you up to this week?
No comments: