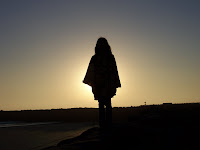 I heard an interesting story the other night from a fellow homeschooling family. My friend, a homeschool mom who also happens to have been homeschooled herself (when the idea of homeschooling was MUCH less common or accepted than it is today) told us about her younger sisters recent experience at university. This sister, who was also homeschooled, is now off at Cal Poly studying engineering or architecture or some such thing. Through dorm life and social activities, she started hanging out with a group of pretty smart and hip University kids. Naturally, most of them went to traditional schools, whether public or private. The former homeschooler is a cute and stylish young woman, which surely helped her get into this group. Apparently, this group had no idea she had been homeschooled, and during  library "study times" they would make fun of other students they suspected of having been homeschooled based on their ugly clothing and lack of style!
I imagine the poor young thing was slightly uncomfortable, and it was a few weeks before she finally confessed to them that she was in fact a homeschooled child.
"Oh, you mean like while you were on vactaions during the school year?" No, she admitted that she had been homeschooled her entire life. The other "cool" kids couldn't believe it.
“But, you dress so normal!” was the universal response... as though poor fashion choices are a requirement of the homeschool lifestyle. Do they think we all wear prairie dresses and bonnets, or pants pulled up to our armpits? Apparently so. Where is my denim jumper anyway?
Now, I have seen and know enough homeschooled kids to know they come in all styles. Some are very fashion conscious, others have their own thing going. The same is true of school kids, and people in general. The thing is, these homeschooled kids are allowed to be different, to be whoever they are, and still be accepted.
Yes, there are some whose look is not magazine style cool, but not every kid in public school is a budding pop star either. But, the homeschool kids aren't subject to ridicule or isolation based on the way they look on a daily basis. The other kids don't seem to care so much. I know homeschooled hip hop teens who hang out with rockers and jocks and intellectuals. They are all nice enough to help out little kids at park day, and aren't too cool to talk to the moms. It seems highly unlikely any of these kids will be called names, beat up, stuffed in lockers or trash cans, given atomic wedgies, or any of the other fates that can happen to kids who are unfortunate enough to be “less than cool” in a school setting. They just get to grow up and be who they are. What a concept!
As for the university kids and their stereotype of what a homeschooler looks like, it's hard to know what to say. I certainly find it ironic that homeschoolers are often accused of not teaching our kids about diversity or acceptance of people different from ourselves. Those kids' traditional education helped them to make it into a university, but the prejudice they had towards homeschoolers (when they didn't in fact know any before then) doesn't seem very accepting or broad minded to me.
2 comments: