These Shoes Are Not For Running

It's packing week for my 5 weeks in the desert, and as usual, I want to take more than I probably need and certainly more than I can fit. The thing is, I can pretty much be sure that I will get out there a thousand miles from home and wish that I had brought at least one of the things I decided to leave behind (or meant to bring and forgot.) 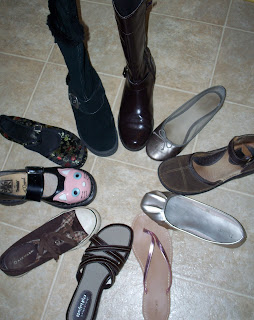 Since I generally own about a bazillion pairs of shoes in all shapes and styles (except pointy heels- those I don't do, as I avoid all things painful at all costs,) you would think I would have what I would need for any occasion. But, when I had to decide what shoes to take for a 5 week tent trip in the desert, I really had nothing that came to mind.
Doc Martin Mary Janes

? No- too hot. Black suede boots? No- ditto. Plaid Sketchers? Nope- virtually no padding on the bottom. Silver ballet flats? No. While the ballet flats, and several pairs of sandals would be cute and probably useful at some points of the trip, I don't have unlimited space. I am looking at flip flops and something that I can hike for miles in. I am stocked up on flip flops thanks to Old Navy, but I was really lacking in the comfy walking shoe department. My current walking shoes were well worn, and in serious need of replacement, so for once, I have a valid reason to go buying new shoes.
Unfortunately, it wasn't easy. You see, sporty shoes look so sporty, and I am really not so sporty, so it was actually a challenge for me. I snubbed countless pairs at countless stores as I just felt too soccer mom like, which would just be a gross misrepresentation of who I am. And, what's with all the white on athletic shoes anyway? 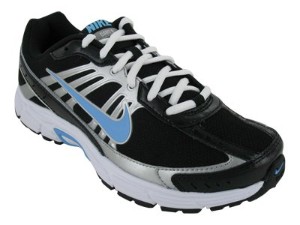 Well, finally I found myself a cute little pair of Nikes

. They're probably the first pair of Nikes

I've had since I was in about 7th grade, and that was more than a few years ago at a time in life when I actually attempted occasional sportiness. However, I've long since realized that my gifts do not lie in my athletic prowess.
I guess these shoes are still semi athletic looking, and therefore misleading, but it was the best I could do, and besides, they're super comfy.
Technically, they are running shoes

, and running is the least likely sport I could imagine actually participating in. Well, maybe not as unlikely as cage fighting, but still, me running is pretty unlikely. I absolutely do not run unless I am being chased by something big and scary.
A non runner owning running shoes presents small problems like my Dear Husband who has been attempting to get me to go running with him for quite some time. So far, having no appropriate shoes has been one of my best excuses not to go.
I quickly hid the box for these shoes, and tried implying they were actually walking shoes, but like a detective he picked them up and saw that it said plainly on the bottom of the shoes "Nike- Running

." Why the heck they had to put that there I really don't know, but it ruined a perfectly good excuse for me.
Now, I'm trying "My knee hurts" and "Um, I think I the kids are calling,"  among others, but they just really aren't that effective anymore. Maybe eventually Dear Husband will catch on to the fact that I really have no desire to run, no matter how great it would be for me. It sounds like torture- horrible torture that would surely end up with unpleasant words.
I almost said that maybe someday I will take up running, but I highly doubt that will happen. These Nikes may say they're running shoes, but as long as they're on my feet, they'll be for strolling.
No comments: Links to this post