Kingsburg Quality? Umm, not so much 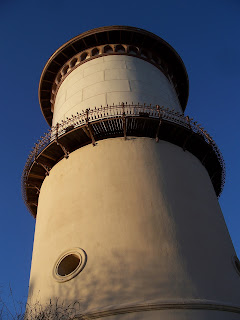 After a relaxing drive down highway 99, which was much prettier than I expected, we stopped in Fresno to stretch our legs, and ran around a nice little park area. Boy Child even found a number of trees to climb. It was actually nicer than I had expected as well. I vaguely remember someone referring to Fresno as something like "the armpit of California" (my apologies to anyone with emotional ties to Fresno, I'm just repeating what I heard) so I was not expecting any interesting architecture, manicured parks or tree lines streets. We were very happy to find all of those. When we got back in the car the sun was beginning to set, and we decided to find a place to spend the night.
Our original plan involved swinging through Kings Canyon and Sequoia National Parks, but since they had gotten 10 feet of snow in the previous week, and we were packed for a desert trip, we opted out. So, we just headed south. While the weather was decent on highway 99, we weren't up for pitching the tent in the dusk, especially when showers were in the forecast, so we sought a hotel. 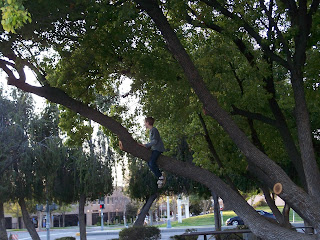 We drove by a Holiday in near a town called Selma, and tried getting off on a nearby exit and backtracking. That however turned into a drive down an odd frontage road with decent looking newer homes with manicured lawns on one side of the street across from houses with boarded up windows and cars with no wheels and people living in them. This frightened all of us, so we got back on freeway at the first opportunity and decided that since it was close to dark we would only pull off if we clearly could see how to get to a hotel that did not look like it contained permanent residents who may or may not have methamphetamine issues. Not too many miles later, we saw a sign for several chain hotels whose names we recognized, so we pulled over. I was aiming for the Fairfield Inn, but saw the driveway for the Quality Inn first, and since I was sick of driving, and it looked OK from the outside, we stopped and got a room.
Boy Child later said that when he heard me say “Quality Inn” he wasn't so sure about it because when they have to say it in the name, it's not always so accurate. It's not like it said “Kwality” though. That surely would have tipped me off, no matter how road weary.
Since I'm working very hard to not be negative for Lent, I am going to try to restrain myself, and just state the facts.
The room looked Ok at first glance, but the first thing that hit me was a really strong odor of scented chemical cleaning products that reminded me of something you would use to get out cat urine. But, it's probably pretty unlikely that the room housed cats, so it was probably just a really strong cleaning agent. My asthma isn't that bad, and I was tired, so I decided it would be fine. 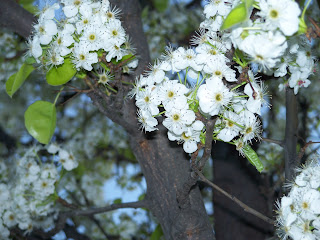 Immediately, Boy Child wanted to hit the hot tub. I wanted to get to my email to get the directions of our next days destination first, so I told him to just start getting hot tub stuff together. Somehow, in my packing though, the flip flops got buried, and he would surely destroy all semblance of order in the tightly packed car, not to mention, he might get hurt if he opened the back and the mountain of luggage landed on him. Plus, it would take me 12 hours to pack it all in again. Since I was unable to find any wireless connections in the room anyway, I went to help him on the way to the ask the front desk about the internet scene. The flip flop finding affair was not a simple nor a quick task, but we did it. The front desk told me yes, there was wireless, but if I couldn't find it, I could use the data port in the room. Back in the room, I looked, but there was no data port. Back at the front desk they gave me a cord to plug in, but didn't really know where the outlet for it would be. Back at the room, after moving some large pieces of furniture, and noticing a mysterious and scary carpet stain, we learned that the cord they gave me didn't fit in the wall. GRRRR.
Fine, I decided Boy Child was right- it was time to hit the hot tub. Thankfully, I had found the corkscrew so I could enjoy a little pinot grigio in a styrofoam cup on the way. We all headed out in our swimsuits, turned on the bubbles, dipped in our toes, and froze. Literally. It was freezing- not a hot tub- an icy COLD tub! What the heck!?! Apparently, they turned the heat off for the night sometime while we were looking for internet and flip flops. This is where it's probably good that I had had a sip o my wine and gotten in a relaxed mood, because I was really, really annoyed, and I've been told that I'm scary when mad. 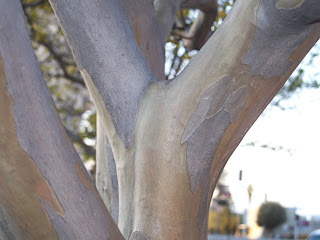 Back at the front desk, she says sorry, she can't do anything about the hot tub, but she can get me another room where the internet might work. We go look at the other room, and when I peek at where the data cord is plugged in to see if I can figure out why ours doesn't fit and maybe avoid moving all my stuff, I see a rolled up pair of socks someone left behind the armoire. I decided to pass on the room with the leftover socks, and she shows me another room. No mysterious stains, no socks, but still the same smell. At least that makes me a little more sure that both rooms couldn't have housed traveling cats. In any case, it's too late to go looking for another hotel, so we just took the room and drug all our stuff down.
On the bright side, the continental breakfast was decent enough. The coffee was what you would expect, but we all had yogurt, oatmeal, muffins and juice, and laughed about how lame our night had been. What a different experience we might have had if we had just gotten this room in the first place.Also on the bright side, spring has sprun and the central valley of California is green and beautiful. I may have inadvertently crossed the "no smack talk" line with this post, but really, I was just trying to relay the experience in an honest way, and perhaps save some other traveler the unfortunate experience.
Boy Child was right with his hunch about "Quality" being "kwality" but at least we had a warm, dry place to sleep.
No comments: