Popping Up Some Edible Science

My hands on family loves both food and science, so we were really excited to come across Vicki Cobb's book Science Experiments You Can Eat

at the library.
It isn't slick or glossy, nor does it have a lot of colorful illustrations. But, it is full of all kinds of fun chemistry and science experiments, most of which seem plenty easy to try at home.  While everything I looked at in the book so far has involved food ingredients, they did not all sound like something I would want to eat. Molds for example... not so tasty sounding.

We started with something that we would want to eat- the popcorn experiments. We love popcorn and our air popper is out a couple of times a week, For this experiment, we were looking at measuring the moisture in popcorn kernels, and how varying amounts would effect the finished product. 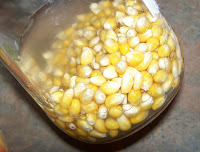 One group of popcorn kernels were to be soaked in water overnight. Not being professional scientists, but rather a group of sidetracked multi-taskers, we accidentally forgot all about the kernels the next day, so they actually ended up soaking for a couple of days. When we remembered, the kernels had swollen incredibly, and the water actually had a fairly strong alcoholic smell to it. So, we ended up with a bonus experiment in brewing, however, we decided that the children should probably not actually consume that batch. Never one to waste though, I figured we could just give it to the chickens. 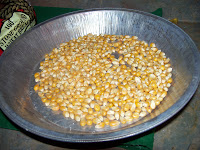 The second batch, was to be dried in the oven on a very low heat for a couple of hours. Now, I would have thought that popcorn kernels are already dried, but apparently, we were just removing any trace of moisture that was there. Thankfully, we did not forget about this batch, as I'm sure the results would have been even smellier than the forgotten wet batch. The kernels didn't look dramatically different, but they did shrink up a bit. 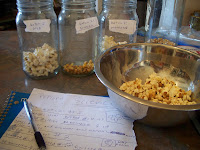 The last batch was the control- just plain popcorn. We wanted to observe how the kernels varied in appearance, size and weight both before and after popping.

My Girl Child is an organized little thing, so she got busy and took thorough notes of the process. I got out the butter and nutritional yeast, ready to snack. 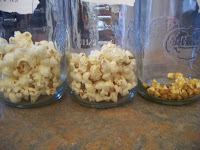 The wet batch not only smelled bad, but it hardly popped at all.

The super dried batch popped, but not as well as it normally would. It didn't quite look right, and when we tasted it, well, it was really dry. Not that popcorn isn't usually dry, but this was not your normal dry- it was like sandpaper dry. 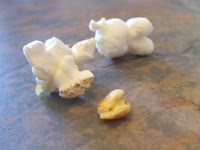 The normal batch popped up light and fluffy as we expected and it was the only one we ate. The chickens didn't complain about the pitifully popped and possibly alcoholic wet batch or the dry as the desert batch. In fact, they happily gobbled it all up, and if they were at all "loopy" afterward, we couldn't tell the difference. It was cold out anyway, so maybe it helped to keep them warm that night.

We learned that apparently there is a science to having just the right amount of moisture in popcorn kernels, and that manufacturers can't just wing it when they dry it, or they will have unhappy customers and an unpleasant product.

We've tried a few other experiments out of the book

, and will try more in the future, I'm sure. Some we are likely to actually eat, like the rock candy, and others we are not so likely to consume, like the ones involving molds. In any case, it's a fun little book with lots of great activities, so don't let the lack of pretty pictures discourage you.

What kinds of science experiments is your family popping up these days?