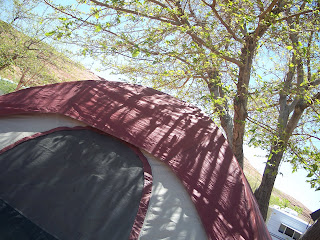 Yes, we slept in a tent for 5 weeks. Thank goodness that living in a tent really isn't as bad or as difficult as many people imagine that it would be. As long as my mat held air, which it did every night except the first, when I didn't close the valve all the way, I slept very soundly in my awesome and toasty REI sleeping bag. Overall, our tent home was actually pretty cozy.

What was hard was packing up and moving our little home every few days. I had meticulously packed the car on departure, and every centimeter of space was neatly filled with stuff. I never seemed to be able to replicate that neatness when re-packing though, and it became more and more difficult to stuff, cram and wedge all of our belongings into the car at all. At times, it felt like our belongings were growing and breeding, like even though we kept eating food, there was never any more room to put things. 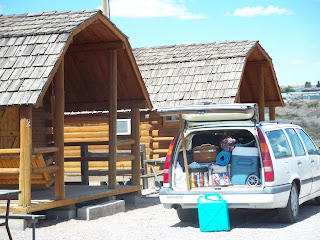 We learned to adapt to moving often though. In no time, we could have our little camp scene set up, and dinner cooking on the Coleman stove. Take down was another story. We did get faster, but it was never as simple as set up. The jam packed car sort of looked like vagabonds lived in it at times, but I have convinced myself that vagabonds and hobos are two entirely different things. We had a home besides our tent, we were just really far away from it, and so for a month or so, the tent and car were our home- that made us more along the lines of nomads than hobos.

We had an interesting discussion on the difference while getting gas somewhere in New Mexico. Boy Child noticed a traveler who looked far more nomadic and road weary than we did. He may have crossed the hobo line, but that is not a judgment call in the least. In any case, Boy Child was rather upset when he noticed that this fellows rather dirty Therma Rest sleeping mat was in fact nicer than his own flimsy foam pad. Boy Child had his choice of several mats we had at home before we left, and he chose the thinnest one. I mentioned this to him at the time, but he assured me it was fine. Apparently, he was no longer so pleased with his choice, and shook his head muttering, "That hobo had a nicer mat than me." This went on for days. Perhaps Girl Child and I could have been sympathetic, but we found it hilarious. 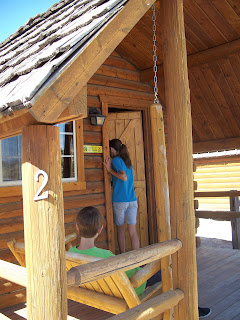 While we all generally liked the tent, thin mats aside, there were some occasions when setting it up or sleeping in it was just not happening. Snow, thunderstorms, 35 mile per hour winds and things like that tend to make the tent life a little less fun. On these occasions, we were happy to find some alternative "kamping" arrangements via KOA or other private campgrounds with cabins. We learned early on after a couple of unpleasant hotels, that these cabins tended to be a much better choice than a cheap motel. The cabins are pretty much identical wherever they are, but it was a very cute look that the kids loved. Besides the bunk beds and porch wings, they also had playgrounds, mini heaters, electricity and WIFI. One even had a TV, but we didn't use it.

My favorite place we stayed, besides the tent, on this trip was definitely the Durango Hometown Hostel. I have stayed at a number of hostels in my life, and this was by far the cleanest hostel I have ever been in. This place was cleaner than my house! (Not that my house is going to win any Good Housekeeping awards, but the point is, I was really impressed with this place.) 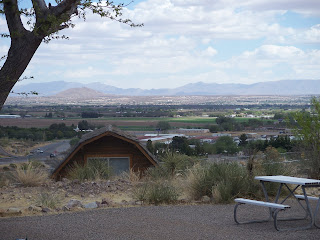 We arrived unexpectedly and with no reservations, just a few minutes before they closed the office for the night. We were slightly desperate because our planned campground was closed, it was cold and getting dark, and my car was acting up. Unfortunately, there were no private rooms available. There were co-ed dorms available, but I was not exactly comfortable with the idea of my kids and I in a room with men I didn't know. The two women who were staying in the ladies dorm had gone out for the evening, so they couldn't ask them if they would be OK with Boy Child staying in there with us. It looked like we were going back out on the streets to try our luck with a hotel, but thank heavens for smart and wonderful people. 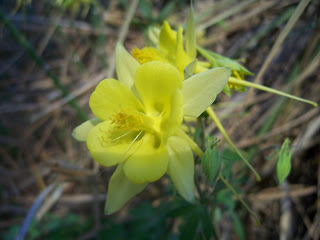 The friendly manager found a great solution by asking a man who was staying in a co-ed dorm by himself if he would mind moving to a male dorm for the night so that my family could have that room. I thought I would have to ask my kids to make sad, puppy dog eyes to guilt trip him into compliance, but he was a very nice man, and agreed, sight unseen. A few minutes later, we were set up with clean linens, and a private room for the night- all for the bargain price of $60. The internet worked, they had a real stove, there were no funky smells, the showers were clean, and they even fed us ice cream cake. 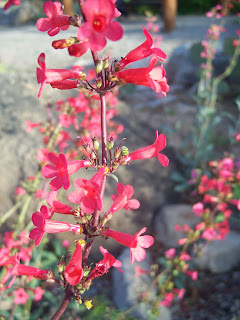 So if you ever find yourself near Durango, Colorado and in need of a place to stay, I would highly recommend the Hometown Hostel. The town is adorable as well, with a free trolley bus system that you can ride all around downtown- a very handy thing while your car is being checked out by the mechanic.

And if you ever find yourself with the chance to spend 5 weeks in a tent, I would say go for it. It's probably cozier than you would think, at least when the weather cooperates. My Boy Child would advise that you bring a good mat though.
No comments: