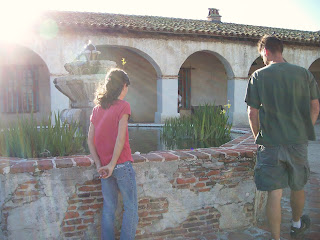 Every 4th grader in the state of California is supposed to study California History, and most end up doing a big project on the California missions, and making a huge mission model that their parents will be forced to store in the garage while it collects dust for years. My family tends more towards spiral learning in practical ways. Some things just keep resurfacing at different times and years, and we learn more about them as we go along. California History is one of those things. As a homeschooling family that loves life learning, how could we just study our own backyard once, especially if we find it interesting? Besides, we tie learning into our travels, and if a trip comes up while a child is in in the wrong grade, I'm quite certain they are still learning, and that it is just as valid (if not more so) than what they would get from a textbook in the right grade. 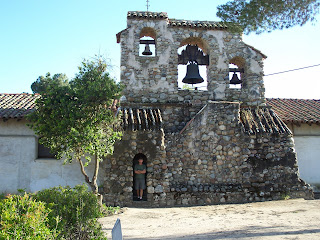 The Missions, of course, had a big influence on the development of California, and so we've tried to visit a  few- whether any of our kids were in 4th grade or not. My Girl Child has been on an architecture kick lately, and her last trip to see where the classic mission style architecture began in our state was several years ago. My husband, who rarely ever wants to stop on a road trip, but prefers to drive straight for endless hours, actually proposed that we stop by Mission San Miguel while we were driving through central California. The kids and I love to stop and explore just about anything, and we jumped on the chance for a free excursion. 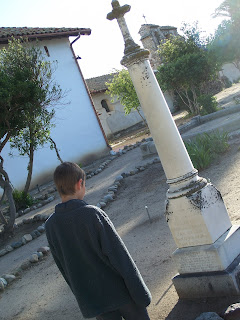 San Miguel seemed a lot more low key than the popular Mission Carmel, but was still in pretty good shape for being over 200 years old. Walking through the low ceiling buildings, it was easy to imagine living with mice and birds nesting in the straw above your heads. Brick ovens were built out in the courtyard so as not to heat the buildings in the summer, but I still would not have wanted to be in charge of baking bread there in July. The simple gardens seem to fit into the landscape, and I was inspired by the way they worked with the local conditions using drought tolerant plants and local rocks to forms paths. You can see that people worked more with what nature intended and would allow before they had all the water they could use coming out of their garden hose. It's incredible to think of the amount of hard labor that went into the construction of these complexes, especially at a time before power tools or hardware stores. 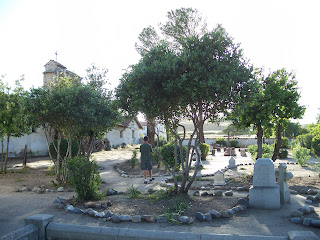 The Missions themselves are a pretty controversial topic in California, and if you delve in very far at all, they can be a pretty heavy subject. I try not to go too deeply into the details of tragedies and illness, loss of life and culture, and otherwise very unpleasant and large events with my kids while my they are young, but I don't want to totally gloss them over either. It's a balance, and the line is always changing as they are growing and maturing. I also try not to skew things one way or the other with their young impressionable minds, but to learn what we can about all sides. While the results weren't always pleasant, it's something to fathom the faith that leads people across dangerous oceans into strange and wild lands to share their beliefs. Of course, like anyplace humans with an agenda are involved, the methods seemed to have varied from loving to brutal, but again, I'm trying to focus on the more positive intentions, both for the psyches of my children and myself. 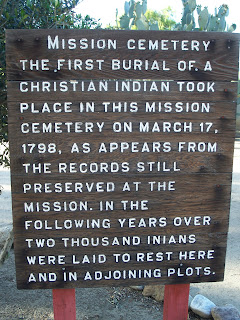 The graveyards at the missions always stick in my mind though. The first time we walked through a Mission graveyard, my Girl Child, who is a very deep thinking analytical person, noticed right away the large number of Indian graves, and began asking questions. She is also a walking spell checker, who has found spelling and grammatical errors everywhere from student workbooks to big name cereal boxes. This sign, at the San Miguel Mission, really bothered her. She questioned first why and how so many Indians had died, and remembered we had talked about diseases and immunity in the past. Then, she questioned why and how no one had bothered with the fact that the word "Indian" was misspelled on the third to last line of the sign, and was shocked and appalled that it had not been replaced. She felt that typos were embarrassing and bad enough in any public venue, but when referring to the remains of over 2000 people who had died, the misspelling was even worse. 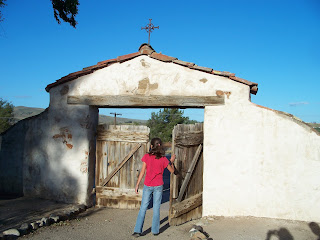 My Boy Child, of course, wished he could climb into the crumbling lofts, or walk along the cool adobe walls, but of course, I didn't let him. Although he already knew that California had once been part of Mexico, reading through booklets in the museum on the history of the mission brought up some questions and discussion. The concept of changing governments and borders is a bit strange when you come from the relative stability we have as modern Americans.
I'm glad we made the stop at this mission, and I'm sure we'll stop at more in our travels around the state. I love seeing bits of the past in real life. I was able to speed by the mission model kits in the gift shop quickly enough that I escaped the request to buy and build one. Maybe we'll make one someday anyway, but if we do, I'm not sure the giant cardboard kit is the route I want to go. I know I don't need any more useless stuff collecting dust in my garage, that's for sure. Maybe we'll make something big enough to house a chicken, or at least sturdy enough to leave outside in the garden for critters to inhabit. I think a little mission style building would fit in nicely in the landscape around our home.
I'd love to hear how other folks incorporate their state history? What are the highlights and "must take" field trips in your state or area?
5 comments: