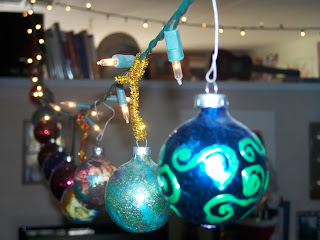 My family and I aim for thinking of and celebrating Christmas as a season, rather than just a day- a season of joy and light, like all the greeting cards say, rather than just of crowds and madness. Of course, it's hard to completely ignore the crowds and madness. People are everywhere, out in full force. We don't live in a big city, but it feels like one this time of year. Lines are long, but thankfully this year, I haven't seen so much of the short tempers.

What I have seen are some wonderfully refreshing examples of the true spirit of Christmas- kindness, sharing and love. My kids experienced Christmas caroling for a terminally ill woman. They didn't know her personally, but when they heard the situation, they responded immediately. While the woman was only semi-coherent due to her condition- she was in her last days- I think we could all see how much the gesture meant to her husband. 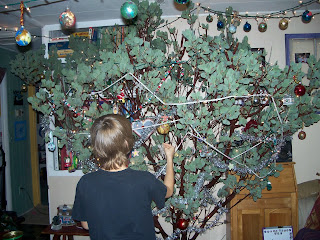 Some gestures seem small, but are still there- kids choosing to donate their time and their things, or to give up something they wanted. Boy child had really wanted a "real Christmas tree" as in a big pine or spruce. We hiked in the woods near our house to fine one, but when we noticed how few pines their were, he agreed with Girl Child that we shouldn't take one of the few. Instead, we took an alternative route and went with a native shrub that there are many many of. We overestimated the size of our living room and had to do some severe pruning. Dear husband was doubtful about our alternative Christmas shrub, but the end result was rather lovely, and the goats benefited with a feast from the scraps.

Even strangers giving up their place in line to other frazzled shoppers, people being patient with small, tired kids and elderly- a small boy at a holiday party saying "I believe in Santa... you have to believe, or his sleigh won't fly" - these things warm my heart and make me smile.

Christmas Day is past, and it was a good one. Lots of good food, and no drama. The gifts were nice and mostly well thought out.  My favorite comment of the day accompanied a pair of Skinny Jeans "I LOVE Santa!" Then, looking at the size label, "Hey, cool, Santa shops at Old Navy." While I know some kids got an Ipad (that they will probably be bored with in a month or two,) gifts at our house were not of that scale. 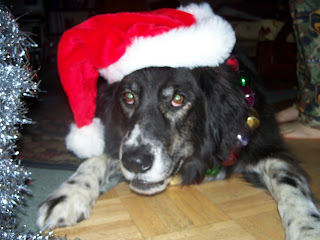 What is really awesome, (and although it seems slightly like something out of an after school special, I swear, it's true) is that both of my kids said "This is the BEST Christmas ever!" Boy Child's favorite gift was a Yo-Yo

(even over a Lego Batman

game for Wii) and he played so long his finger lost circulation and changed color (I suggested another activity at this point.) After a few rounds of Banagrams

and Apples to Apples

,  Girl Child curled up on her giant purple fuzzy pillow and some new books. I ate enough chocolate and Brie cheese to keep a small country alive for a year, a put on my new PJs and slippers to write. The cats chased ribbons, and the dogs endured being dressed up, then ate scraps of Roast Beast. Everyone was happy.

The celebrating is still going on for us. We have one more family dinner today, and I need to get off the computer because I still have to whip up some last minute craftiness to bring with us. I hope the season continues to bring joy and love to your families.
No comments: Links to this post