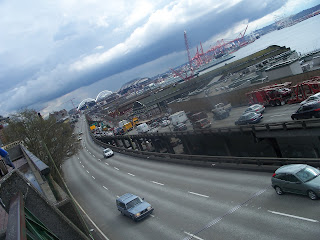 We had been driving through the cold rain for hours when the sun finally broke through. It was nearly dark, but we were still glad to see clear sky, and to turn off the windshield wipers at last. The Pacific Northwest isn't known for warm weather, but this was farther from springlike than I had hoped for. We'd been in the car for too long, but decided to keep going- to make it to our friends home before bed.

It was late by the time we arrived, but all 5 of her children came out to greet us. Inside we met the dogs, pet rats, and even a hedge hog. We hadn't seen these friends in years, and the family had grown by a few, but my friend still had that rare patience and grace in the midst of whatever crazy chaos life (and children) throws at her. 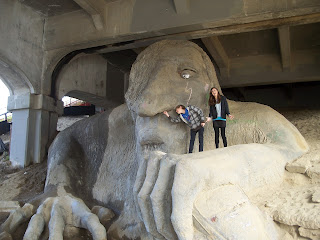 They had generously offered to share their home as a base to spend a few days and explore the city. She also shared the advice she was given upon moving to Seattle. Don't let the rain stop you from going out. If you wait for it to stop, by the time you get your car keys, it will start back up again. I'm glad we listened because the weather changed from sun to wind to sprinkles to hail within the course of an hour, and continued that way for our entire stay. You just have to wear layers and deal with it. 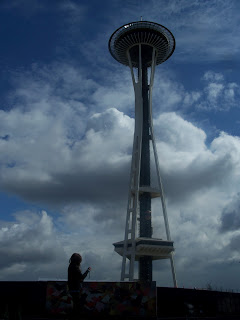 Day 1 was mammoth. We started off by finding a giant troll under the Freemont Bridge. (Yes, we scout out odd tourist attractions like this ahead of time.)

Then, it was to the famous Space Needle and surrounding park. We spent a few hours exploring sculptures, shops and the Pacific Science Center.

We took the monorail (on which we almost lost one small child- but we found him quickly) to Pikes Place and where we were entertained by street musicians galore. One in particular sang songs of his painful childhood memories of broccoli for dinner, while hula hooping.

The shops were full of inspiring and creative things made by local artists that gave me countless crafty ideas of my own. 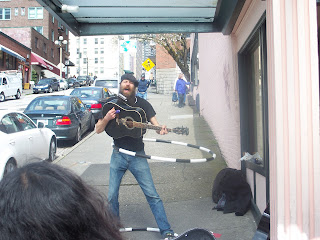 A trip to Seattle wouldn't be complete without seeing the Gum Wall. It's an entire wall on the side of this building has been covered in used chewing gum. It's definitely one of the most disgusting things I've ever seen, but strangely artistic when the light hit all the colors. The kids talked me into buying some gum so we could add to the wall, and I almost heaved, but I did it. (I then promptly doused all of our hands in sanitizer.) 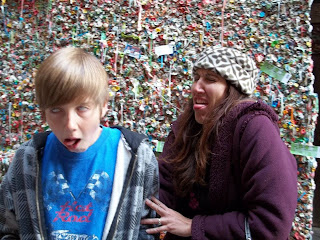 I liked many things about Seattle- but especially was how clean it is. (well, not the troll or the gum wall) For a major city, it just doesn't have the level of filth that LA does though. The public transportation was great too but the parking was painfully pricey, which encouraged me to plan well and just skip driving if possible.

We could easily have spent a week in the city and not run out of things to see and do, but alas- we only had a few days. Naturally, we made the best of it and just crammed in as much as we could. The kids had natural youthful energy, and I was in the land of Starbucks.