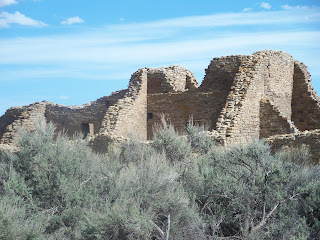 I always think of the east coast of the United States as being the side of the country that hosts the most history, but driving through the American Southwest immersed us in times past. Much of it is more modern- the whole wild west expansion stuff, but there were people here long before the cowboys- and in the South West, you can still see tons of evidence of the lives of the ancestral Pueblo peoples. In different climates, like much of California, the homes of Native Americans were often mobile, and the remains have long since deteriorated over the course of wet seasons. You can see replicas, but the real things are gone. But in the desert, there are entire villages of ruins- amazing dwellings built with the material at hand- rock and adobe- which have been remarkably preserved for many hundreds of years. And it's not just a home or two here and there- there are huge, complex villages. The effort and engineering it took to build these is pretty amazing. 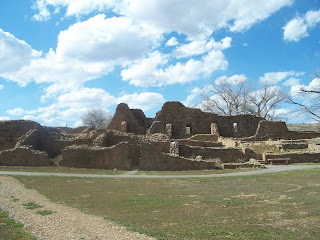 We were lucky to visit so many of these awesome and ancient dwellings this spring. It was like an extended, multi-week field trip / living unit study learning about the original inhabitants of the land and the wisdom of their ways. Working with your environment was a big lesson- like using stone and building into the earth both in caves and underground- this could insulate and regulate extreme desert temperatures, and seemed a better idea than trying to build a wooden structure in the blazing sun when there was not a forest for miles.

The lessons of what happened to much Indian culture and so many people is beyond sad, so it was great to see thriving and healthy Indian populations in many areas today. These aren't just the people who were once there- they are still there- alive and well. We did see some rural areas of poverty of course, and that typically isn't a pretty scene. But what really struck me were the large school groups in New Mexico museums- full of healthy and beautiful Native American kids and being led by mostly Native American teachers who (unlike many school teachers) were respectful with the kids, and actually seemed to be enjoying their time sharing the world with them. I love kids, but am not usually very excited to have our museum time interrupted by school groups. These were happy scenes though, and those are what stuck with me- resilient and strong people who valued their young ones. 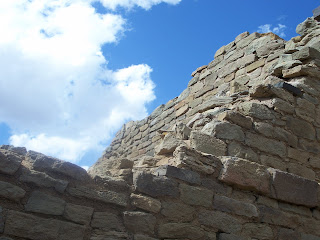 Another thing that both struck me and stuck with me was Aztec Ruins National Monument. When I came across the place on the map, I was a little confused and began to question my own knowledge base because I hadn't thought the Aztec people were anywhere close to that area. Gee- what kind of education did I have? Well, I was right with my instinct- they aren't even Aztec Ruins! Whew- I was worried for a bit!

Anyway, I guess at one time, some folks who didn't know much about the native people called them Aztec, and gave the name to the nearest town. By the time they realized that these were not Aztec Ruins and that the people who had lived there were not Aztec either, I guess everyone was used to the name, so they just kept it. I found that a little odd and somewhat insulting to the ancestral people whose homes those actually were. As far as I know, the federal government is not very likely to change the name of the monument any time soon, and I didn't seen any obvious opposing protests about it either. I wonder though if other people are bothered by this as well? 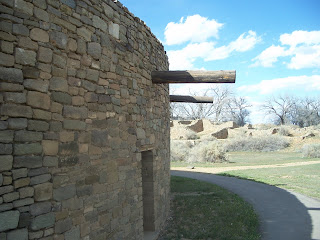 Despite the name, the monument was very cool. Stepping into these dwellings takes you back in time, and I always imagine the lives that were lead there. I felt a little creepy after going into one room and learning that it had been used as burial chambers- we paid our respects and moved on, not feeling quite right about having intruded. The Great Kiva, a spiritual room, was a replica, but it was magnificent as well as huge. Being in this replicated kiva did not have quite the same feeling of positive energy for me as being in original kivas where we knew people had said prayers for hundreds of years, but it was very neat to go inside and see what it might have looked like when it was new. 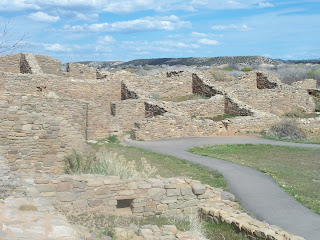 My kids did the Junior Ranger program, so they spent a good amount of time hunting for clues, and reading, thinking and writing about the past. Bless the Ranger who gave them their badges- she was really, really into this program. I could tell she took the whole thing very seriously by her solemn manner when she swore them in. My kids were a little tripped out that she got teary eyed when they took the oath to protect and preserve the parks, but I told them it was great that she loved her job that much.

We  came away feeling a number of things- like there is a lot to gain from learning about both the wisdom and the mistakes of the people who came before us, feeling grateful for people who are passionate about what they do, and feeling like it's really nice to call people by the correct name if at all possible.
4 comments: Links to this post