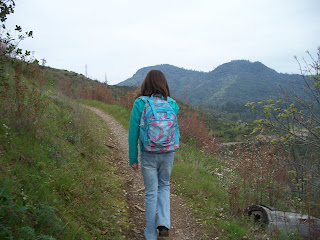 So, my husband completely surprised me last weekend by taking the kids and I on a family hike- and the whole thing was his idea. I thought he must have absorbed some of our adventurous plans to explore the world (starting nearby) and decided to be a good sport and plan a little something for us. He wanted to show us a trail that he has run a number of times. Of course I don't run, unless something scary like an angry pit bull is chasing me, but the trail is used by hikers, some mountain bikers and an occasional horse / person combo, so we went for a hike. In hindsight, I am wondering if family fun time was truly his motive, or...was it something darker? Was it a sly and sneaky attempt to cause me grief? 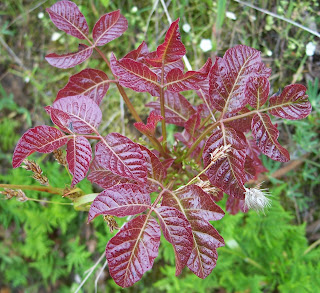 You see, this trail he chose is quite possibly the most poison oak infested trail in North America. (I have no scientific or research based foundation for saying that, but, there was an insane amount of poison oak all over the place) Husband barely gets poison oak- he can trudge through it cutting firewood and get a small, slightly red rash the size of a quarter on one arm that might last a couple of days. I can look at someone who has been in poison oak, and spontaneously burst out with an inflamed rash that covers my huge sections of my body. It burns, and itches; it oozes, and then it crusts over. It's not only painful, but quite disgusting to look at. I have had it on my face creating something that resembled crusty lip augmentation, on my hands making me look like a leper, and on so many other places- it's just painful to think about. 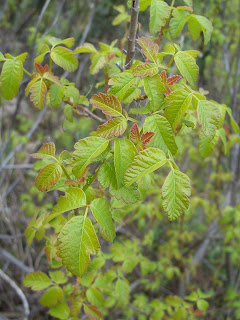 I would think that husband would know this, as we've been married a long time, but somehow, he still doesn't seem to think about little things like head to toe rashes resulting in an angry wife. Fortunately, I have developed an eagle eye for spotting poison oak. I know what it looks like with leaves, and without. I know that it comes in many shades of red and green and many lovely combinations of the two. And I go to great lengths (which occasionally include shouting) to encourage those around me to avoid contact with the plant, lest they spread it's toxic oil to someone susceptible (like me.) Well, we brought our dogs on this little hike, and of course, I thought it would be wise to keep them on their leashes. Husband was somehow surprised at this notion, thinking it was too limiting to the freedom of the day try to control the dogs the whole time, and  saying "It's not like you can keep them 100% poison oak free." 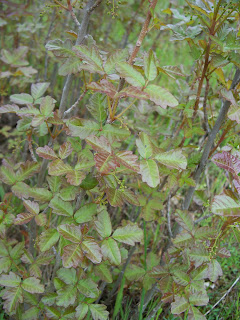 Well, that was true, since the evil plant reached it's arms across the trail trying to get me in several places. But, a little brush against poison oak is not the same as a full roll in or romp through it, which is exactly what they would have done off if they were off leash. So, I argued that I could at least keep them 95.9% poison oak free, which would drastically reduce my chances of getting it since we were riding home in my car, and I highly doubt he would be bathing the dogs anytime soon. Besides the poison oak, we did pass a few mountain bikers, and some jack rabbits, which my dogs undoubtedly would have chased causing further stress had I not listened to my inner wisdom, which said quite clearly "Of course you need to have the dogs on their leashes! DUUUHHH!"
It was a good chance for the kids to see in an up close and personal way, the variations in the same nasty plant. It actually is incredible that something that can look so lovely can have such sinister qualities. 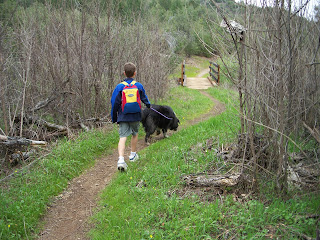 Husband chose not to argue that I was spoiling the freedom of the day, and I chose to believe that he was not really plotting to cause me pain and suffering, but simply looked at the world in a different way, so he might not think of things like natural consequences, and horribly itchy rashes for other people. I packed up some good snacks, including dark chocolate and brie cheese, which certainly helps improve my outlook on any occasion. We came across a lovely lakeside spot where the humans enjoyed food, and the dogs enjoyed a leash free swim. 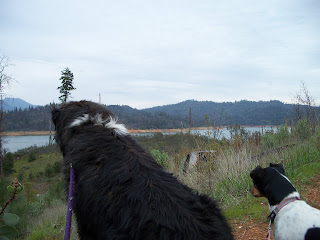 Husband had thought ahead to plan on including some geocaching on the adventure. I waited on the trail with the dogs, and  yelled "Watch out for that poison oak there!!!!" about 4,782 times while my family scoured through the brush looking for hidden treasures. The kids found two geocaches, and the dogs found plenty of ticks, 3 of which I noticed crawling on the small dog while driving home. (At which time, I freaked out, screamed "eeeeeewwww" and threw them out the window- the ticks, not the dogs- while managing not to drive off the road.) 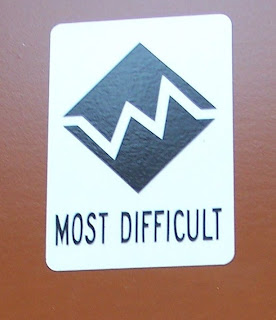 At one point, a little over midway through the hike, husband and boy child were traipsing through dubious looking brush staring at GPS coordinates rather than what they were walking in, while girl child and I were sitting on rocks eating dark chocolate, and I noticed this sign along the trail my husband had chosen for us. Ah, of course, we'll be taking the "Most Difficult" route. Was this another part of his plan to torture his wife? Why not a "Moderate", or how about "Easy" route? Nah, let's take the "Most Difficult" one. That'll be more fun! As if upon cue, it started to rain on us.
We looked up at the brush where the boys had just been, and couldn't see them. We yelled as loud as possibly that we would be ditching them at that point, and would meet them at the car. 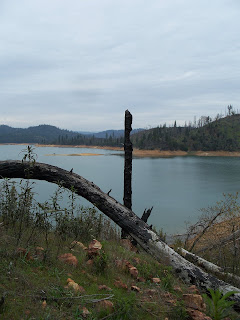 The trail wasn't as difficult as I had anticipated, but there were definitely rocky hills, steep cliffs and sharp switchbacks. Luckily, the rain stopped, and there were also lots of blooming wildflowers, and plenty of scenic vistas to enjoy. The iron rich, red soil was beautiful, as were the incredible rock formations. The entire area had been burned by a wildfire a few years ago, and it was interesting to see the patterns nature took in her comeback.

By the time we got home, my feet were sore, my body was tired, and after seeing the ticks on the dog, I had the creepy crawly feeling that they were hiding on all of us too, just waiting to latch on with their foul, disease filled mouths. I was also pretty sure that the geocaching members of the party had managed to get in the poison oak, despite my warnings, and would unthinkingly rub it all over my entire house. I made everyone throw their clothes directly in the washing machine, and head right to the showers, while the dogs were banished to the porch.
Adventures in nature will always have their naturally unpleasant aspects, but I still think they are worth it. And adventures with my husband, well, rather than think he just finds adding grief to my life amusing, I am trying to go with the thought that he does mean well, and just doesn't take notice of the difficult details. (Even if they are clearly printed on a sign.)
6 comments: Links to this post