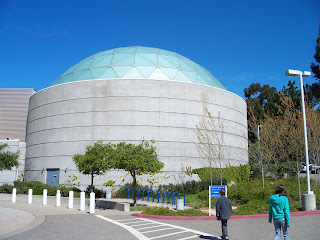 Years ago, I used to think that the city of Oakland was a big, scary, high crime mecca and all around dangerous place. I'm not sure exactly why I thought that- maybe due to the fact that I had a window shattered out of my car and my jacket stolen while I was attending a concert there once, and the cold, foggy ride home left an imprint on me.
In any case, I really had no idea that Oakland has a rather adorable side with historic houses full of wonderful architectural details. It also has trails, parks and way more hillside forests than I would have imagined were that close to the city.

My family and I spent a lovely night and day there on our latest installment in hands on learning adventures via road trip. We visited a cousin that I haven't seen in years, and his wife that I had never met. My cousin was as funny as I remember, his wife was fabulous, and we all stayed up late laughing at silly stories. In the morning, we took a walk around their cute little neighborhood pocket, which was full of homes and yards with character- perfect for my girl who has been studying both architecture and gardening. 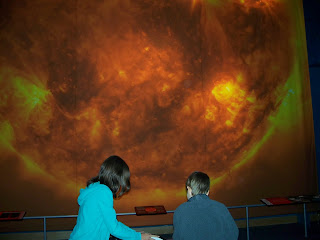 In preparation for the trip, I wanted to remind my kids of a few dangers of big cities. They're rural dwellers, but they're fairly well traveled. Still, as a mom, I do the reminder thing semi often. I think they took me a little too seriously though, as when we got off the freeway late at night on a dark street with graffiti, one of them said, "Shhh, be quiet, and don't look at anyone. They could have a gun!" I told them there were probably more guns in our hillbilly neighborhood at home, and that most people in the world (including the city) are mostly good. City people just aren't used to the friendly "Hi there!" from smiling strangers that we tend to throw out, and that's why they look at us oddly, and that of course, wherever there are more people, there are more opportunities for criminals, so naturally, you have to be more careful. I think (and hope) that they get the difference between being safe and being fearful- you can enjoy life safely, but it's hard to enjoy anything fearfully. The kids were surprised by how quickly neighborhoods went from not so good to very good (in looks anyway) and were glad we stopped in a good one (as was I.)

As life learners, we go to museums just about everywhere we go, so while in Oakland, we visited the Chabot Space and Science Museum. It's one of the many museums that we can get into FREE with our membership to our local science museum, and it was definitely worth the stop. There was all sorts of space travel and astronaut paraphernalia including some groovy astronaut outfits. 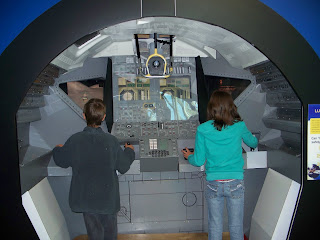 Husbands' favorite exhibit was the Russian space capsule- they also had a model of the capsule that sent the first dog into space- the poor thing never
made it home though, and the quarters didn't look all that cozy. I wonder if she was medicated as I would think that sailing away from earth at high speeds in a tiny plastic and metal box had to be a pretty stressful experience for a dog that had no idea what in the heck was going on.
Anyway...Boy Childs' favorite part was the "Beyond Blastoff" exhibit where he got to try out astronauts weight lifting and exercise equipment. .Girl Child liked all the hands on exhibits and the movie "Tales of the Mayan Skies." I myself was a little sleepy and had to fight napping in the dark theater with the lovely background music and soothing narrators voice.
We were all amazed by the space toilets and recycled water systems which are quite the fancy setup. I never realized that in space they have to recycle every drop of water, including sweat and urine. I can understand that hauling quantities of water would be unrealistic, but still I have trouble with the idea that this processed and recycled water is "cleaner than tap water in many cities." Reason #12,472 why I am probably not a good candidate for space travel- I have an aversion to drinking processed body fluids 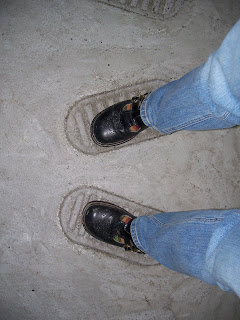 Outside, we were treated to three huge telescopes- like big enough to require their own buildings with roll away rooftops, and clear enough skies to see Jupiter during the day. They have free star watching parties on Friday and Saturday evenings, but unfortunately, we wouldn't be able to catch one on this trip.
We would've liked to also explore the surrounding forested park area around the hilltop museum, but we had to hit the road, so that's on the list for next time. We bought some planet sticker and game books for the car ride, and got going.
So, now that I know there are plenty of reasons to stop on that side of the bay, I guess I won't always just race over the Bay Bridge and head into San Francisco. I'm very much looking forward to going back to Oakland again when I have more time to explore what a fun city it is. The kids are too- especially now that they know they don't have to avoid all speech or eye contact while we're there.
2 comments: