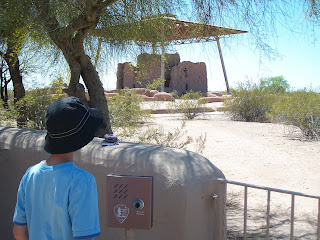 I am just loving how much my kids and I are learning on this adventure we are taking though the south west. A recent stop was at the Casa Grande Ruins in Arizona. The site houses the remains of a very big house, as well as several smaller houses, or buildings built by ancient Sonoran desert people over 600 years ago.

At first glance, we all thought it looked interesting enough, but the ranger filled us in on lots more details about the structures and the people who built them that really impressed us all. 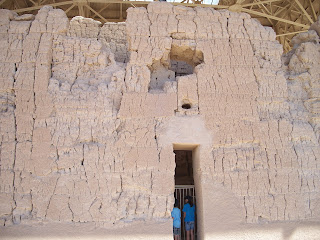 First, the structures- the big house is four stories tall, with walls about three feet thick making the temperature inside a comfortable 75 degrees year round- that's pretty impressive in a place that can be 120 degrees on a summer day and 28 degrees on a winter night. The windows and roof openings placed to align with celestial and solar happenings, presumably as a calendar of sorts, and the single fireplace was designed in such a way that heat from it could spread to all the rooms of the house. They don't know the exact purpose of the big house, but there were several smaller ones nearby and they were all built with wall thickness and angle that was engineered to hold the load based on the height of the building. 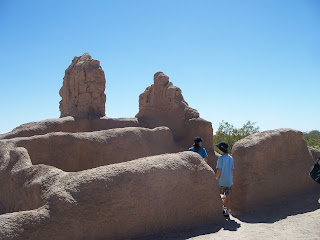 Speaking of engineering, they also built an irrigation system which may not look very exciting, but it is a pretty fancy ditch that gets water going fast enough on the downhill, that they were able to get it to then get going UP hill. That's pretty impressive if you ask me.

They farmed beans, corn and squash, as well as cotton in in various colors, and apparently at that time there was a river nearby with fish. Now, there does not appear to be water for quite some ways.

Their whole compound was set up gated community style with ladders to get in. Apparently, six tribes lived there, all with different religious and cultural traditions, but without much evidence of conflict- again, pretty impressive in my opinion. They had enough leisure time for art, and they traded with tribes as far away as the Pacific Ocean. 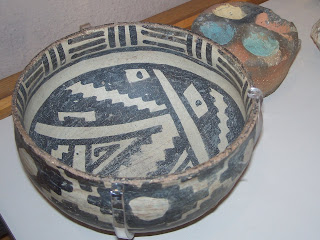 The whole place was abandoned several hundred years ago, and historians don't really know why. They do know that the structures have suffered more damage after being discovered and vandalized than they did in hundreds of years of weather. The Ranger felt strongly that this civilization rivaled the Romans for their ingenuity and understanding of building concepts and engineering. They certainly were pretty clever in managing to create these structures and to work with the harsh climate they lived in, rather than fighting it. And managing to get along with each other despite differences is pretty clever as well.

I can't wait to see what we learn about next.
2 comments: