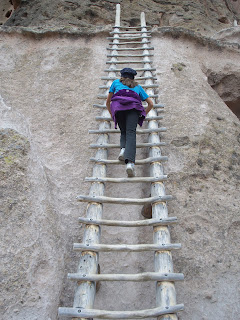 There are so many places that neither my kids nor I had never even heard of before we set off on this south west adventure, and Bandelier National Monument is one of them. It's also probably my favorite of my discoveries. Bandelier is in the Jemez mountains in the northern part of New Mexico. It's an easy drive from Santa Fe, which was a lovely little town in it's own right, with some especially awesome chili. To get to Bandelier you wind your way up through these mountains and canyons that reminded me of northern California. The scenery was spectacular- and such refreshing treat to our desert weary eyes- there were trees and greenery everywhere.

But the coolest part by far was the homes of the ancestral Pueblo people- they were these amazing cave condos built right into the cliffs. After setting up camp, we explored and explored. Some places were for looking only, but I couldn't believe they actually let us climb right into some of the cliff-side dwellings. 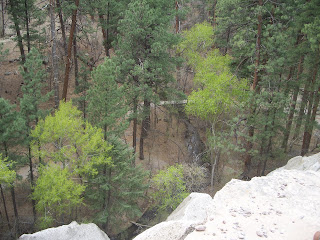 The highlight was at climbing up 4 or 5 ladders, something like 140 feet up, and looking out at the beautiful valley below from a home that people lived in 800 years ago or so. The ladders weren't as scary as my Girl Child had imagined, although looking down was a little freaky. We were so impressed with how neat these cave homes were though that we really didn't care about the heights.

What I can't imagine though, is climbing up and down the ladders carrying pots of water on my head, or a baby on my back or a big sack of corn like the ancient people must have. I think I am semi hardy, at least by modern American standards, but when I think of things like that, I always feel a little less competent in my athletic prowess. 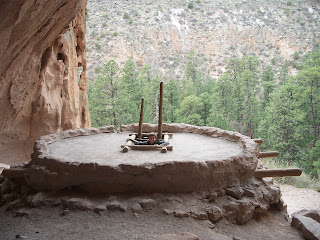 Anyhow, at the very top of the multi-story dwelling was the entrance to the great kiva- a round ceremonial room that you had to climb another ladder down to get into. We spent some time in there talking and imagining the lives of the people who had lived there- how many prayers were given, decisions made, and even babies born, right in the same spot in the ceremonial room we were sitting in.

Another very cool thing about Bandelier is the man that it was named after. He was a 40 year old self taught anthropologist whose story shows that you're never too old to keep learning, teaching yourself, and enjoying the gift of life. Bandelier was not happy working at his father's family business, which he was expected to run for life, so he wrapped up his work there, and took himself and the knowledge he had acquired, and went to explore the Indian ruins in the west. He found some amazing things, probably enjoyed himself a lot more than he would have if he hadn't gone for it, and ended up with a National Monument named after him. 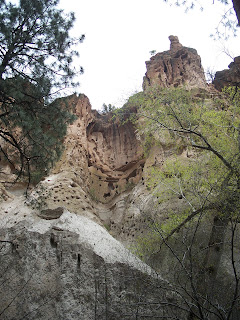 As a family that is committed to life learning and following dreams, that kind of story is always inspiring.

We also saw plenty of not so wildlife while visiting. There were deer on the trail, a crazy big eared squirrel who ran at people at extremely high speeds like he was playing chicken, and a coyote who just cruised right next to us as we ate lunch one day, pausing only to look at us like "hey, what's up?" before he headed on his way.

For the beauty in nature, the history, the story behind the name, and the over all cool factor, of all the ancient native dwellings and ruins we visited on this trip, I have to say, Bandelier is at the top of the list.
8 comments: