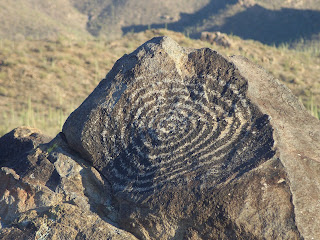 We have had the pleasure of seeing lots and lots of petroglyphs on this south west journey we are on. These ancient artwork symbols adorn rocks for hundreds of miles, and many of them are 700 or more years old. Some of the best were at Saguaro National Park. We also went to Petroglyph National Monument, and those were nice too, but honestly, the place didn't have the magic. That's probably because there is now a subdivision of big look alike houses that comes practically right up to the chain link fence around the monument. When we climbed the hill trail, and looked out beyond the petroglyphs, what we saw was suburbia encroaching on a large scale.
At Saguaro, we looked out and saw nothing but desert and mountains and cacti, and you could just imagine the people who were once there. It was much more conducive to contemplating the messages that these ancient people might have been sending than a housing tract. I am glad that they did at least fence in Petroglyph National Monument, and that they are preserving it, but still, we all wished they could have sprung for a little more land around it. I guess budgets affect everything. 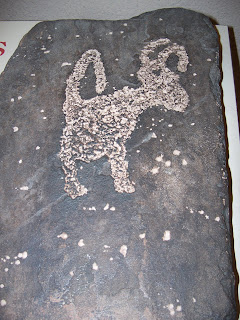 In any case, Boy Child had lots of questions on the meanings of these drawings. Were they just art or were they messages? Were they ancient graffiti artists? Why do we see the same images in so many places? Do they have a sacred meaning? Will anthropologists someday in the future be mystified by the graffiti of today when they uncover crumbling bridges and walls in cities of our time? We all got a kick out of that idea.

Boy Child also spent some time making petroglyphs of his own (not in the National Park or anywhere near the ancient ones of course, just at our campsite and on random rocks.)

No one really has an answer to his questions, but in any case, these ancient drawings were pretty cool to look at and ponder the what and why they are still there.
2 comments: Links to this post 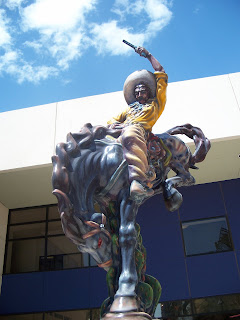 Since we are trying to see each of the 50 states in the next 5 years, we wanted to hit as many as possible on our south western adventure. But, at the same time, we didn't want to just do drive-throughs- we actually wanted to spend some time and explore each place. So, we came to a bit of a problem with Texas. we would be very near the border, so we felt we should hit it. Our primary stop in the state would have been to see our friends who live in Austin, which I hear is a pretty hip town, but it's nowhere near the border we were near, and Texas as you know is a really big state.
When we realized our friends were about 14 hours each way out of our way, we decided to save that travel time to enjoy the other sights on the way. But, we still wanted to at least see some of Texas, which led us to El Paso.
I had two different people advise me against going to El Paso, no offense to those who may be connected in any way to the place, but these people basically said it was a dive and we should not bother.
Well, we didn't listen. I just kept hearing that song "Out in the west Texas town of El Paso, I fell in love with a Mexican girl...." and I thought, how bad could it be? Besides, in her travel research, my Girl Child found that the art museum in El Paso had an incredible impressionists exhibit covering Monet to Matisse. That was enough to get us there.

It was awesome, awesome, awesome- the art museum that is, not the city overall. The city overall was a border town, and we drove down some depressing poverty stricken streets on our way to check out a mission. I had an unreasonable fear of somehow accidentally crossing the border and getting stuck in Juarez, with all of it's dangerous travel warnings, and without our passports. We didn't though- we made it in and out without unintentionally ending up in Mexico or getting run down by any of the giant trucks driven by testosterone fueled men wearing big hats. The mission was pretty, but the art museum- that was impressive.

Their regular collection featured all sorts of cool sculptures and a large Renaissance collection, which you were allowed to photograph and were splendid in themselves, but  the impressionists display- that was simply awe inspiring. Not only did we see works by both Monet and Matisse, but also Degas, Chagall, and so many more. We made a list of the artists all on a napkin, which of course we lost, probably after someone blew their nose on it. I do love the fact that I can take my kids to art museums, and they like it though. I am a lucky lady indeed.

The museum also had interesting information about the artists lives, their connections and the time periods, so there was an educational component along with the beauty, and they did a great job at making it interesting.

Boy Child was amazed at "how you could see how much paint they glopped on up close, but it looks really cool when you stand back at a distance." Girl Child was just all around appreciative of seeing all those great works in one place. Of course, you can't take pictures of those great works, but we will remember the experience, for sure. 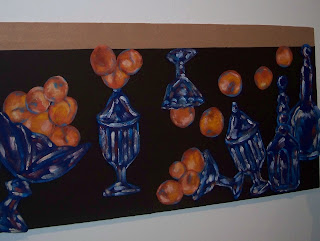 We got in a tad bit of trouble when I did take a picture of this hands on, movable felt art piece, and my flash caught the eye of  the security man. He rushed over and scolded me severely. I was under the impression that since we were allowed to touch and alter the piece, in fact a sign advised us to do so, which of course we would not even consider doing to a Monet, that I could also take a picture. Mr. Serious Security Man however thought that it might confuse other people into thinking that they could photograph  the other valuable works (even though those all had very clear "No Photography signs with both pictures and words.) Apparently, he has no faith in common sense, but I didn't argue with him. Another guest did though, because she thought he was being ridiculous, so while they discussed his lack of logic, we snuck off.

So, while I don't have much else to say about El Paso (other than don't get lost on scary side streets) I can honestly say that their art museum is well worth a visit. Just watch out for the security man.
1 comment: Links to this post