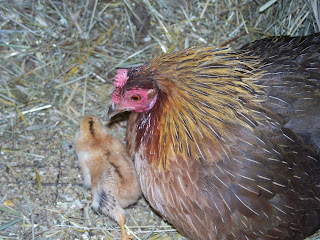 Our baby chicks started hatching last week. These weren't planned- the last thing I need is more chickens, but since no one collected our chickens eggs when we went to Sacramento last, and that darn rooster likes to keep the eggs fertile, we came back to a bunch of broody hens setting on eggs. Some of the eggs were probably just laid that morning, but others had been there for 4 or 5 days, which is pretty far along in chicken embryo development. It only takes 21 days to get an actual chick, and by 5 days, you have a beating heart. Of course, I wouldn't dream of eating eggs that might in the slightest resemble little chicks, but since they had the potential for heartbeats, we didn't want to toss them either. So, we let nature take it's course. The nests were all in the eggs collecting boxes about 4 feet off the ground in the coop. There at times were 2 and 3 hens piled on top of each other on each nest, even though there were 9 more empty nest boxes they could have sat in. Most of the ladies stopped laying, some seemed to stop eating and drinking. Their combs started getting pale and droopy, and their attitudes were awful. They just went crazy with broodiness. (I have known humans to exhibit similar behavior.)
The first baby hatched about 4 days early- which I think qualifies it as a preemie. I found the poor little thing laying cold next to the hens who were doubled up sitting on top of each other on top of the rest of the eggs. They were all fighting over who sat on the eggs and no one was paying any attention to the actual chick. I brought the poor pathetic thing up to the house, and set up a little chicken intensive care unit for the preemie. It was a pretty sad little thing-just laying there peeping loudly. My daughter named it Peepers McCheepin, and was a wonderful nurse.
Over the next couple of days more chicks started hatching. Leaving them in the coop was not safe for several reasons- they could fall to their death, drown in the water dish, get pecked by the other birds, get eaten by pretty much anything etc. Plus, they had at least 9 psycho hens fighting over them. So, I took a sweet little Banty  hen, who has successfully hatched several batches of chicks, as well as a duckling for me in the past, and moved her to a separate cage with the first 3 babies. I slipped 2 more under her wings in the night and she accepted them into her flock. She's too small physically sit on and keep warm very many babies, so I took a chance with a young Aracauna hen who seemed very determined to set. I moved her into a private suite with the few chicks she hatched. I've slipped a few more each day until she now has 9 babies. She's doing great, and is a very sweet mother. Chickens are hysterical in their confused looks when they wake up with more chicks than they went to sleep with. Most of them seem to just roll with it though, and mother everyone.
The last chick to hatch was under a very “intense” hen called Serious. She has been a good, although strict mother to chicks in the past. While some hens lovingly cluck at their babies if they wander, Serious gives them a good peck upside the head and they come back. She is the “spanking type.” She is also fiercely protective and viciously pecked my hand in 2 places, breaking the skin even, when I was attempting to section off a private area of the coop for her and her baby. I pity the fool who tries to mess with her baby. Unfortunately, she occasionally mows over the poor baby in her attempts to attack the rest of the world, but I think they will both do fine.
Poor Peepers had a rough time. We had 3 separate “OH NO, Peepers is dead!” moments. The first 2 when we picked her up and rubbed her little body in sorrow, she started gasping and breathing again. She even started running around pecking the other chicks between relapses. She ate and drank, but never really seemed to be growing (chicks grow Very Quickly.) Finally, despite all her special care, Peepers passed on. We had a ceremony yesterday.
Now, were up to to 15 living chicks, and our one departed Peepers. The circle of life continues on the Jorrick Family Farm.