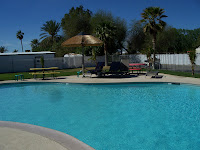 After four days without showers at Joshua Tree, even my Boy Child was ready to hit the road and find some cleanliness. We drove through the south part of the park, and came out, not surprisingly into more desert. All I could think of was how unpleasant this route would have been 100 years ago or horseback or in a wagon in the blazing sun with no air conditioning or cold drinks. Not to mention no sunscreen or lotion. Thankfully, we do have air conditioning, ice and lotion, and we can move at 70 miles hour.

We headed east, and eventually, just as we were about to leave California, we came to the Colorado River, where we found ourselves a not so primitive campground. 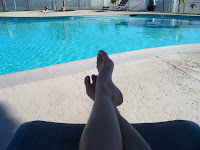 KOA campgrounds are definitely a different type of camping- in fact the billboard advertising the Colorado River KOA announced, "It's not camping...it's Kamping!" As much as I dislike intentional misspelling, it was more important that I find a shower, a laundry facility, and I was hoping for some wifi as well. We found all three and more at this little kampground.

It was about a bazillion degrees out (ok- maybe it was 80, but I think my layer of grime was holding in the heat) so I was very pleased when the owner offered to drive us around in a little golf cart to pick the best spot. We found a shady site right by the river near a bird sanctuary. 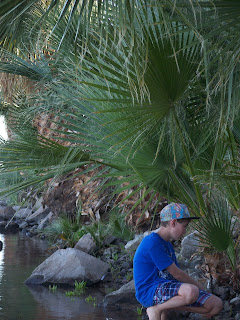 Boy Child was immediately ready to hit the pool, and was not pleased when I made him shower first. But, I figured that he would leave a dirty brown wake in his path if he jumped in first. So, we all showered (I was so happy, I washed my hair twice) then we headed poolside.

None of us was in the mood to unload the car or set up the tent with the sun blazing overhead, so after a long time of lounging, reading and snacking, we delayed our responsibility further and took a walk down to the lovely little palm tree covered beach on the river where we lounged, snacked, and read some more. There were swift current signs everywhere, which Boy Child actually noticed himself, and realized that anything beyond wading there would not be such a good idea. He was happy enough to mess around in the sand and rocks as we gazed across the river over to Arizona. 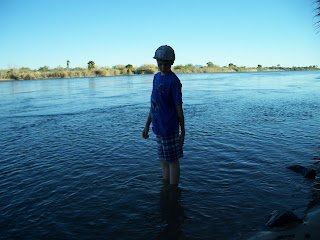 Eventually, the sun began to set, and we decided to make dinner. Somehow, we got the idea to skip setting up the tent altogether since we were only staying one night, and just sleep in the back of the car. It's a wagon, and with the seats folded, it was plenty long. The width however was a bit snug, but it saved us a lot of work. I realize that it may have looked slightly hobo style if anyone had seen us sleeping in a car, but I'm going with the theory that by this time it was dark, and I was up early cooking breakfast and packing up anyway, so maybe no one noticed. 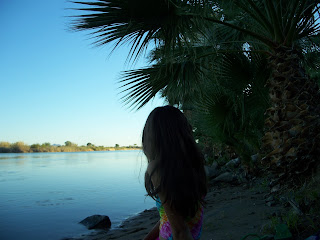 This place was a very welcome change of pace from the roughing it style of camping we had been doing. The facilities were clean, and they had a pleasant little rec room where we were able to plug in our laptops and charge our phones while we worked. The store was very convenient since we needed ice and a chocolate fix, and it wasn't even really overpriced. The staff and the owner were super helpful and friendly folks, and even gave us a jump start when we drained our car battery. We were also able to do all of our laundry for $5, which would have been worth double that price. We even got in another shower each before we loaded up, said goodbye to California, and headed east to see some friends in Phoenix.

If you're ever on the border of California and Arizona, and looking for a spot to "kamp" I definitely recommend the Colorado River KOA.
No comments: