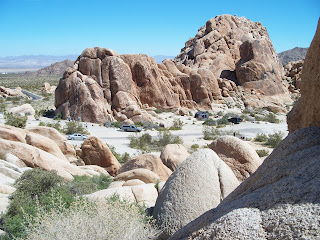 OK-  two kids and a tent in a campground that has no has no water and no showers, only pit toilets, is surrounded by giant boulders and caves that beg to be climbed, but could potentially lead to major injury, not to mention nearly 100 rowdy homeschoolers- that pretty much describes the 4 nights we just spent camping at Joshua National Park. It was an amazing place and we had a great time.

I hadn't ever heard of Joshua Tree National Park, let alone Indian Cove that can recall, and we probably would have missed it on our southwest adventure, but when I heard about the big homeschool group camp out, we decided to head off on our trip a week early, and add it into our itinerary. We were all so glad that we did. 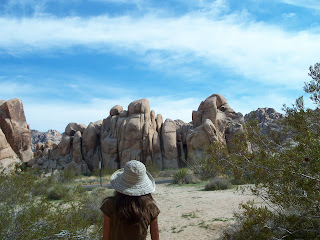 This group gets together for camp outs all over the state, and many of them already had established relationships that went back for years. We didn't really know any of them, but they were a friendly bunch, and we felt welcomed. We had decided to go after the group site had already filled, but I think an individual site was the best choice for us anyway. I like to be social and have been known to chit chat for hours, but I also like a little time and space to myself, and so do my kids. So, we had to walk up a hill to get back and forth between our site and the group one for the nightly potluck, but it was no big deal, and the ability to be unsocial until after I've had coffee was worth it. 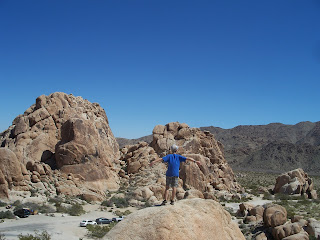 We spent the first day lounging, well, I lounged, and Girl Child semi lounged. Boy Child climbed, climbed and climbed. Our campsite was up against the rocks and we had our own personal little cave right behind us that was a nice cool hangout in the heat of the day. We read, drew, played games, climbed a little more, and that evening, I had a delicious margarita on the rocks, literally.

Every evening, every evening, we hit the potluck and campfire. We ate like kings, and there was some lively singing. The kids ran around playing capture the flag and flashlight tag for hours. 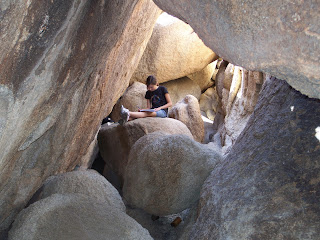 Some days, we hiked and found natural springs as well an oasis in the desert. I'm pretty sure we hit the park at the perfect time, as wildflowers were blooming, and it was hot, but not deathly hot. We drove through most of the park as well. The north end with Indian Cove was my favorite because of the rocks that provide shade, beauty, and entertainment, and are not found in the southern part. We also explored ruins, cactus gardens, and the visitors centers / museums, which had lots of info on the plants and animals, the history of the native peoples and the settlers, and the woman who saw the beauty in the desert that most people didn't, and had the foresight to convince the government to set aside the land. Some areas had cacti and other plants popping out of the rocks at such perfect intervals, it looked like a master gardener had designed it, and it gave me lots of ideas of drought tolerant plants I'd like to try back at home. 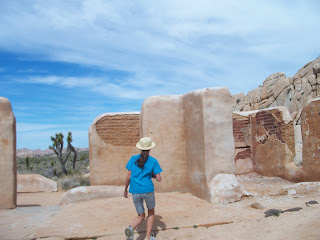 Hauling water wasn't as bad as it sounds, but the pit toilets were very, very bad, and something I would rather not have experienced. Also, despite our efforts at sponge bathing, we were all beyond ready for a shower and hair washing by our last day there. At least all of that food I packed was paying off because even aside from the potlucks, we were eating really well. I was also pretty impressed with how well my creative coffee making turned out.

Boy child climbed so much he actually wore out his shoes. I slid down some rocks on my bottom and tore a small hole in my shorts, which promptly turned into a huge tear when I bent over. So, I guess a shopping trip will be in our near future. 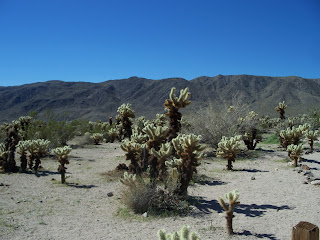 We met some very nice kids and parents both from the homeschool group and from the campground in general, saw some fabulous sites and had a wonderful and relaxing time at Joshua Tree. One thing about the desert is that you really have to pay attention to really see all the beauty there is. Sometimes the harshness and heat of it can make people miss the wonder. It's a perfect place for peaceful, reflective thinking, especially if you are in a nice cool cave with a margarita and snacks and not in the blazing sun. I am so very thankful that we made it to Joshua Tree and for the peace, space and time to think it allowed us all. Not that I came to any major revelations or anything, but the relaxation was great.  Next stop- the Colorado River.
4 comments: Links to this post