A few years ago, my kids got this electric "crayon making" machine, which was a very nice thought, but never came out of the box. The idea of making crayons was neat, and I assumed we would melt down old crayon stubs to make new ones. The kit however, came with a bunch of perfectly good crayons to melt and pour into new crayon molds. That seemed like a waste of energy and time to me. It didn't even suggest making swirl crayons or anything- just taking something that was already usable, and using up a bunch of time and effort to make the exact same thing. We're not fans of busy work in our homeschool or our lives- there are enough real things to do in life- so the box got buried under some of those other things. 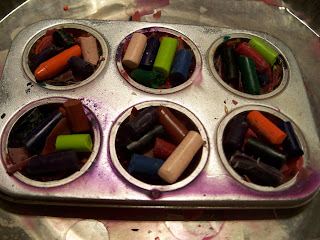 I came across it recently, and we all decided to pass it on to someone else who might actually use it. But, we still liked the idea of making crayons, and we had a jar full of old, busted stubs that were eager for their new lives. We also had a little muffin tin that had been part of a play kitchen set leftover from my childrens' younger days which looked like the perfect alternative crayon mold, and we figured that our oven would work just fine for melting.
I remember being a child, and so badly wanting an "easy bake oven" which was heavily advertised on TV in the late 1970's. I never got one, but was very disappointed when I actually saw one in real life. It was just an overpriced plastic box that used a light bulb to cook with. Why not just let your kid cook with a real oven? I mean, I don't think it was at all about safety because people didn't really seem to focus on safety in the 1970's in the same way they do now. Kids bounced around in the back of the car with no seat belts while adultts smoked in the front, and it doesn't seem like anyone thought a thing about it. Besides, theoretically, a kid could easily burn down the house with an easy bake oven as well as a real one. In fact, I think my mom may have used that argument as to why I didn't get one, along with the fact that it was stupid. In hindsight, she was right, but I was disappointed nonetheless. 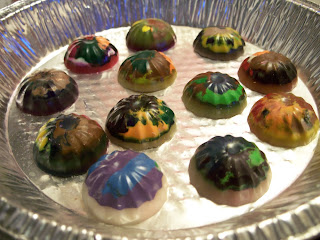 Anyway, my point was that I wanted my own kids to know how to use a real oven, and they do. I don't think it ever would have occurred to them to buy a plastic machine that made obnoxious humming noise in its' attempts to produce low hear, whether for making cupcakes or crayons, especially when they could just turn the real oven on.

So, we melted a few batches, and the end result was these cute little crayon rounds. Since the broken bits we started with included crayons with wide range of age and quality, the finished product is a bit of mix too. They all look pretty neat, but some have waxy colorless bits swirled in that don't leave any color when you try to draw with them on paper. Oh well, at least they look pretty, even if they don't function all that well for the intended purpose. Maybe we should remelt them and add wicks to turn them into tiny tea light candles, or maybe call them magical play muffins and give them to a young friend to play with.
Any other ideas as to what to do with these cute little crayons that don't draw?
2 comments: