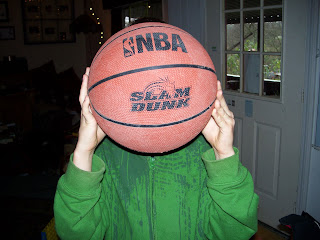 It's funny that I have spent the last 9 years telling my son not to be so aggressive, and now that he is in his first season of basketball (and playing against teams of giant Amazon children who would be creaming his poor team if they kept score, but thank goodness they don't.) I find myself actually encouraging him towards actually being aggressive- in the game at least. It's not like I want him to mow them over or anything, but when playing large, assertive people who don't seem to realize that basketball isn't really a contact sport, it may not be a bad idea to be assertive back.
I am clueless to the rules of most sports, so I'm not exactly sure what exactly constitutes a foul in basketball, but any activity that looks remarkably like a dog rubbing on someone's leg seems inappropriate to me, and I'm not sure what the underdog kid is supposed to do at that point.
I'm a little surprised that my kids even play sports since we are not a sporty people- at all. We don't watch sports on TV, and don't know anything about major teams or players. I have no idea who won the last Super Bowl or who will be playing in this one. I just plain do not care in the least about professional sports.
I don't really play sports myself either. I was never very good at athletics as a child, and grew up in an era when it seemed acceptable to jeer, taunt and loudly and cruelly mock other players. I opted out of even trying to play whenever possible to avoid any possibility of the humiliation. But, I couldn't always avoid playing- some of those PE teachers made sure everyone played- and I still carry emotional scars from being forced to play dodge ball. It is a particularly harsh game, the thought of which makes me wince to this day.
My kids don't go to school, so they are never forced to play a game they hate in PE. But, they are active little people who participate in a variety of things of their own choosing. And, if my kids want to follow an interest, I usually try to find a way for them to try it, even if it's a sport I'm really not into. (Within reason that is, but I do reserve the power of veto in all events)
So, my kids have started playing a few sports, and learning life lessons, gaining a few skills and having fun in the process.
I find it interesting that I should actually enjoy watching my own kids play sports so much. They are adorable- not just my kids though- most of the kids out there- are just so darn cute running around chasing balls having a great time (at least on my kids' teams- the professional Amazon children are not as cute however in my opinion, but I may be slightly biased.)
There are the talented kids- the ones who you can tell come from jock filled gene pools and have played before. There are also the goofy ones who are just really not very good at all, but boy are they trying. And then, there's everything in between. Some of the kids are all serious about it, and some are just staring off into space until they get bonked in the head by a ball. One kid throws himself across the room jumping for a ball every time only to land on his face, and he doesn't seem to realize that most of the time, he could've just reached out and grabbed it, and skipped the whole jump / crash scenario. Bless him for his enthusiasm anyway. 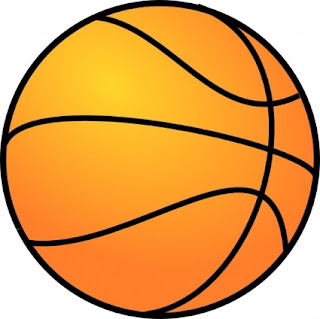 My own kid lives in the mountains with a gravel driveway that is not exactly conducive to practicing dribbling, and had never even seen the sport on TV, but he is out there having a blast. He really does give it his all, even if he completely ignores any advice or direction from the coach, and just charges ahead with his own plan, oblivious to the fact that it might not be working. He definitely is having a good time with it.
I find all the kids hilariously entertaining, and I love watching them and cheering them on, but I'm beginning to wonder if I'm overly enthusiastic though. They have all these rules about good sportsmanship and parental conduct these days, which are a necessary thing I suppose, to prevent the truly competitive and mean parents from scarring another generation of children. But, I often get confused. When shouting things like "Shoot the ball!" am I coaching from the sidelines or just cheering? Does it make me a bad sport as well as a bad example when I inadvertently groan out loud after the other team steals the ball and scores again? I'm not exactly soft spoken or quiet in everyday conversation, so it's possible I cross the line to loud when I'm excited.
My kids have mentioned in the past that it drives them insane in karate or baseball when they totally blow it, and they are well aware of the fact, but the enthusiastic parents on the sidelines are shouting "Almost!Good try! You'll get it next time!" I explained to them the other option of mean parents yelling "What are you doing loser?" and while they agreed the positive option was better, they would still prefer if the adults would just put a cork in the comments and let them do their thing. They didn't name me specifically, but I am pretty sure I'm guilty of annoying positive encouragement.
I wonder if I actually could sit through a whole game without shouting out anything? I'm not sure I could, but I think I may give it a try next week. Maybe my kids will even thank me for it.