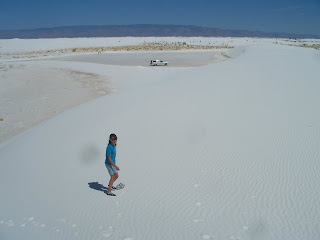 Taking a snow sled down sand dunes is something that has never occurred to me, but we spent a super fun day doing just that in White Sands National Monument.

The place is amazing with miles and miles of glowing white sand hills in every direction. It's a little like being on another planet.

The gift shop is all over the idea of sand sledding, and of course it sells snow disks- overpriced round little plastic sleds that look a bit like a trash can lid. 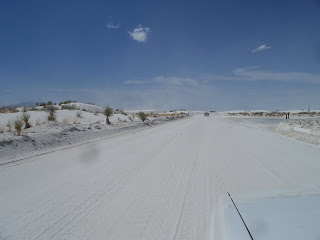 I am so glad we did it. The dunes are beautiful to walk around and explore, but the sleds were really the funnest. There are a few advantages to sliding on sand versus snow. The first and most important- it's not cold! Going back up the hill though- Whew- what a workout that was. At the time, I was thinking a chair lift would have been convenient, but in hindsight, I guess that my cross the line of over commercialization of a National Park.

We thought this sand / snow crossover thing was so cool that we attempted making sand angels. They didn't quite turn out the same and required a bit more imagination to picture the end result as an angel, but it was entertaining anyway. 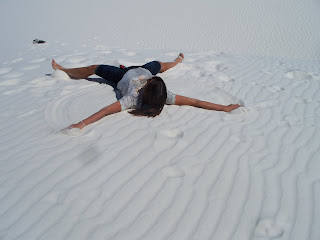 The sales girl talked us into also getting a bar of wax to make the sled go faster, which seemed like one of those useless add ons, but it was 75 cents, so I bought it. The wax was a good call, and actually really helped you move and not get stuck- especially when the largest and heaviest member of our party (me) got going.

You can even return the sand disk at the end, in case like me, you have no other use for a sled in the middle of the desert, and you get $5 back. The only problem with the whole roll about in the sand, slide around and make sand angels, is that now we have sand everywhere, and I do mean everywhere. 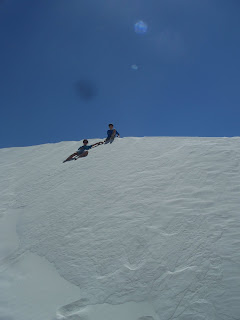 When we arrived, there were signs everywhere asking us not to take the sand. Apparently, some people fill up jars to take back home, which seems like a semi pointless souvenir to me when a picture could get the point across just as well, not make a mess, or take up as much room. While it seems like the miles and miles of sand dunes could never be depleted, I guess with enough usage they could. Anyway, we hadn't planned on taking any with us, but it was in our hair, clothes, and shoes. This apparently, is the primary disadvantage to sand versus snow. At least snow melts and eventually dries. Sand is with you for a long time- possibly forever.
Now I am a firm believer in the "Don't take anything" from National Parks rule. We respect that the area is meant to be preserved, so we don't take rocks, sticks, plants, anything. Plus, I realize that if everyone who went to the popular parks took just one thing, it would all be gone soon. Honestly though, we brushed off, and had no intention of taking any of the lovely white sand dunes with us, but still, every stop we made for the next few days, we would leave a mini pile of white sand in our wake. In fact, nearly a week later, I opened Boy Child's backpack, and out dumped another pile. We swept our contraband into a baggy figuring it was already out of the park and just going to get sucked up by a shop vacuum if left there.

So, like it or not, we have a messy and beautiful reminder of the beautiful white sand dunes. We're still in awe of the beauty of them- unlike much of the desert where you really need to stop and look, the beauty here just jumps out at you, and apparently, it sticks with you as well.
No comments: Links to this post