The BEST Birthday Party Ever!!!

My daughter recently had what was called by a distinguished guest, “the BEST birthday party EVER!” Yes, I am shamelessly tooting my own horn here because it was a bit of work to organize and set up, but the excited, giggling girls made it so very worth it.


The birthday girl had decided that she wanted a murder mystery type theme for the big day, and after doing a bit of research, looking at what was out there online, and talking to other parents, we decided to write our own mystery. There are a lot of pre-packaged parties available, but she wanted the flexibility to create the characters, and did not want the whole thing to be scripted. So, my budding young writer decided on 5 friends who she thought would get into the spirit of their roles and play along (as well as her little brother,) and she came up with a character for each of them. The characters were very funny, with names like “Suzette Twallette,” “Yo Mama,” and “Madam Kazoo” and with each having several ridiculous traits. After deciding that what called these characters together was “The Disappearance of Cynthia Silverspoon,” we had to somehow tie them to the missing woman. So, we added connecting details to their character sketches- one became her bodyguard, another her personal trainer, the owner of her favorite restaurant, her singing coach, and a snooty French cousin. Just for fun, we added details to each character that made them a suspect and gave them reason to dislike (and therefore potentially set up) one or more of the other suspects. Each character received a summons for questioning from a private investigator (me) along with a sheet describing each of the characters. I needed some adult help to pull this off, so I added in a gardener / chauffeur (Jonathan Brownthumb) and baker / maid (Miss Muffins) who were played by my husband and mother-in-law. My daughter didn't want to know who did it, or any other big details, so she handed it over to me at that point to come up with the rest. Now, this all came at a very busy few weeks in my life, so I was running on very little sleep, and as a result, there was a whole lotta silliness involved. Luckily, her scout troop leader passed along some ideas from a mystery party she had done, and that was great for getting ideas flowing.


Before the party, I secretly enlisted the help of a friend who lives up the street to play the part of Cynthia Silverspoon, and while my husband took our children on an errand, we made a video recording of Miss Silverspoon dressed in faux fur coat and pearls making a dramatic plea that she “just knew someone was out to get her...” While she was putting the directions to her secret bank accounts in the safe, she is knocked on the head by an off camera villain, and the video goes out. 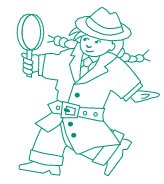 Fast forward to the day of the party, the chauffeur picked up the girls (in costume and character,) and brought them to the estate for questioning. We took fingerprints, and mug shots, and then sat the suspects down to watch the video of the night of the disappearance. Starting at the scene of the crime, the kids had to follow clues which led them all over our property and pointed at every one of them at one time or another. There were messages in Morse code, flag code, maps, invisible ink, and more. They had to do quite a bit of thinking and looking things up while working together to figure out the clues.

At one point, they were called to pull up a file on the computer which contained another surprise video of our Jack Russel Terrier interrogating the animals on the farm. Our animals have quite a bit of personality, and since we spend a lot of time with them, my kids and I regularly make up goofy conversations between them with each animal having it's own recognizable voice. The kids thought this was hysterical!

One of the final clues led them to check the phone messages, one of which was from the “neighborhood watch” asking them to call about some suspicious activity. When they called the number back, they were directed to get to the missing woman's vacation home (shown on the map as the friend who played Miss Silverspoon's house.) We rushed up to her house and inside they followed a trail of items to an upstairs closet where they rescued Miss Silverspoon (she tied herself dramatically up when she heard we were coming) The final clues strewn around her house pointed back to the gardener and the maid, so we had to rush back to our house. The kids found the suspects trying to escape and nearly tackled them in their excitement to save the day. My mother-in-law is one hip grandma, and she did a great job hamming it up with a Scooby Doo inspired “We would've gotten away with it, if it wasn't for those meddling kids!” The kids loved it, and one proclaimed it was “the BEST birthday party ever!” All of that mystery solving made us hungry, so we ate pizza and cupcakes, and the girls had a sleep over in which lots of giggling, and very little sleeping took place.

I'll admit, it was an effort to think up the clues and put it all together, but it was totally worth it. The kids had so much fun, and so did the adults. Unfortunately, during the mystery, one of the girls fell while running for a clue, but got right back up and kept going with barely a tear. Maybe it was the excitement and adrenaline because she barely complained, but the next day we realized the poor girl had sprained her ankle. Luckily, she is on the mend, and she still had a great time.

I'd love to do one of these kind of parties again. I'm not opposed to buying a packaged one, but did have another friend warn me to check the ratings. She had purchased a mystery game for a family party last year, and was unpleasantly surprised as the game went along and very adult themes popped up all over the place. I'll definitely be on the lookout for that if I do buy one.

Now, I'm just on the lookout for when we'll be having our next celebration, and what the theme will be. No matter the work and mess, we love parties.
4 comments: Links to this post