Today's post is from my fabulous Girl Child. She recently read a  bizarro book that I had on my shelf from a Children's Lit class I took a few years ago, and I wanted to share her review here. I hope you'll enjoy it. So, without further ado: 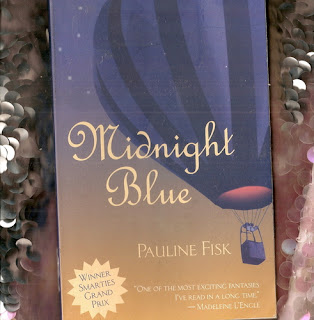 A Response to Literature by Lily C:
Midnight Blue by Pauline Fiske is an imaginative science fiction novel, which is both captivating and creepy to read. The book follows the story of a troubled girl named Bonnie who runs away from home in a hot air balloon. Then, she finds herself swept into a weird parallel world where she encounters much the same difficulties as she did in her original one.

The majority of the story takes place on a remote mountain farm, called High Holly Hill, where Bonnie isn’t sure how she got there or how to escape. The farm is owned by strange (yet kind) people and is supposedly looked after by two mysterious gods. The creepy sense of the setting only contributes to the supernatural feel of the book.

In the two worlds the book takes place in, things are both opposite and similar, like a parallel universe. In the original world, Bonnie lives in a crowded city apartment, but in the second one it’s a country  farm. Still, the characters in both worlds are strangely similar, and the very person Bonnie ran away from in one life has an alternate identity in the second.
Overall, I both liked and disliked this book. It seemed to have a confusing plot- unlike a lot of fantasies, there was not a clear quest for the main character to follow, or conflict to solve. Even by the end, I didn’t understand how Bonnie had been transported to the other world, or what the villain’s motives were. But, I was still caught up enough by the intrueging characters, and quick-moving pace, that I wanted to finish it. It reminded me of “A Wrinkle in Time,” mostly because it’s so weird.
This novel was, overall,  an interesting piece of literature, and I can definitely say it is unique from any other book I’ve read.