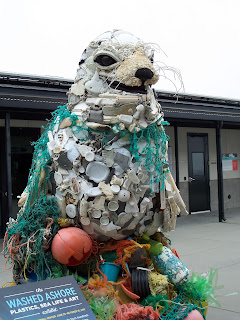 I'm the first to admit that plastic is an incredibly useful material. I'm extremely glad that we have it to wrap products in so they aren't all exposed and covered in filth, and really can't imagine life without it- but the saturation of plastic everywhere I turn is also a major pet peeve of mine. I mean why does the cashier at the grocery store try to put my bag of potatoes into another bag? They're already in a bag for goodness sakes!

It really drives me nuts to see plastic bags that fly out of the can on trash day, because I know that unfortunately, a lot of them wind up in the ocean.

I've found all sorts of interesting plastic trash, much of it from far away places while beach combing with my kids.  We try to pick up what we can and make sure it makes it to a garbage can, but an artist is Oregon is doing much cooler things with the trash on the shores of her native beaches. She's using it to create some pretty spectacular art.
A few months back, my kids and I went to the Marine Mammal Center in Sausalito, California where we got to learn about all sorts of things, including ocean garbage. As you can imagine, the plastic that ends up in the ocean is often a bummer for the critters that make their homes there. Sometimes they swallow it, and sometimes they get entangled in it, and it rarely works out well for the animal. 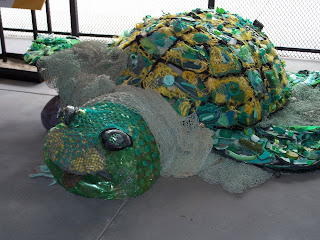 These folks do some wonderful rescue and rehabilitation work with marine birds and animals. Over the years, this group has treated over 17,000 animals including seals, sea lions, whales, dolphins and other species- many of which are threatened or endangered, and many of which are sick or dying from something having to do with plastic. My Girl Child is very interested in Marine Biology and it was very inspirational as well as educational for her to learn about the work being done.
While there we got to see the very cool art work of Angela Pozzi. The huge sculptures of ocean creatures in her Washed Ashore exhibit were made exclusively from plastics picked up on the beaches of Oregon, and they are amazing. Her team of volunteers picked up 3.5 tons of plastic garbage from a 20 mile stretch of beach and churned out 18 gigantic sculptures from it. The woman certainly has vision and her giant fish, seal, jellyfish, and starfish all make quite a visual statement. It's now on a global tour, and is quite worth checking out if it comes anywhere near you. If not, the website is also interesting. 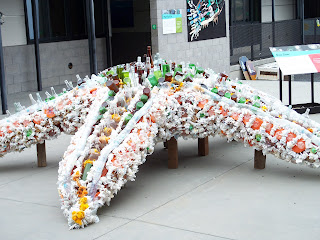 If you happen to be on the Oregon Coast, Pozzi's group even does trash art workshops. How fun would that be? It all makes me want to go home and make some trash art myself, but I haven't quite got the vision (although I do have all kinds of junk around here that could probably qualify as trash.)
A few years ago, we had a "Mad Toy Laboratory" party which was kind of along those lines, but on a smaller scale. We took old and unloved plastic kid toys, dismantled them, and with hot glue guns created new artwork. We had sculptures with Barbie heads and muscle man arms sticking out of the side of race cars among other things. We also learned that hot glue really is hot, and several children went home with burns.
Does anyone have any fun ideas for trashy art type projects for Earth Day this year? I'd love to hear about them.
2 comments: