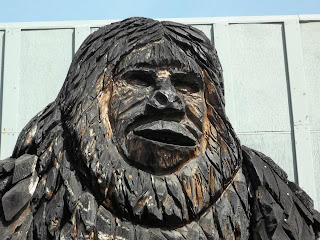 OK, I tend to count all kinds of things as educational, but even people who accept that about me might raise eyebrows at our current studies of Bigfoot. He (or she) is also known as Sasquatch, or depending on the region, Yeti.

A couple of weeks ago, my kids and I found a documentary on Netflix called "Ancient Mysteries: Bigfoot." I figured if it was narrated by Leonard Nemoy, how could it not be cool?

After seeing snippets of the Bigfoot chasers on Animal Planet, I expected a good deal of rural ridiculousness. My kids have been filming their own mockumentaries about Searching for Sasquatch, which have certainly added to my joking about the whole phenomenon. 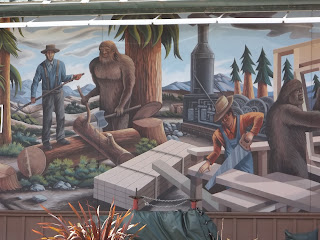 This documentary though, was in fact quite interesting. I'll admit, I was able to laugh off a lot of the "evidence." Just because someone has a doctorate degree doesn't mean they can't be just as kooky as a hillbilly in camo with night vision goggles, but still, there were a few things that made me stop and think, hmmmmmm....well, maybe?

Apparently, the legends of the creature go way back, and I found it interesting that the local Indian tribes have all sorts of cultural stories that include Bigfoot and are hundreds of years old. Some modern "scholars" have figured out a whole social structure for the creatures, but I didn't quite get how they came to their conclusions. 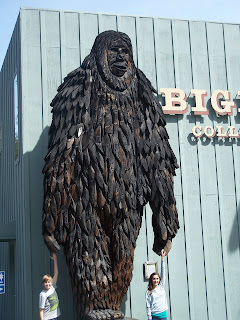 It just so happens that we live within a few hours of major Bigfoot territory, where not only are there gas stations and burger joints named after the mysterious species, but also a "Bigfoot Museum." Naturally, we had to go.

There were more footprint casts than I could count, some looking fairly realistic, and others looking someone made a large and perfectly shaped foot model. The most authentic looking had toe prints (the little lines in the skin, like fingerprints, but obviously on toes.) The mysterious "fur" samples looked like something I cleaned out my dog brush, but apparently when it was sent to a lab for analysis, it came back as an unknown or unidentified species. Hmmmmmmm......

We scoured the woods a bit on foot, but mostly by car on paved roads. The off road terrain is made up of steep and dense hillsides which someone or something could quite easily hide in for a long time if they had some survival skills, because no one else is really going to try to climb around in those places. While we did see plenty of shadows, our only confirmed sighting of Sasquatch was in murals and statues. 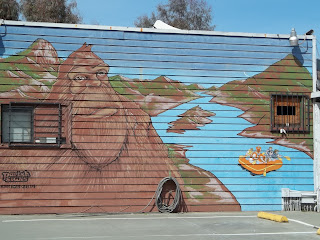 So, I'm not convinced he (or she) is out there, but I'm not convinced they aren't either. If they are, I hope we don't find them, and they get to live out happy and long lives free from hillbilly hunters and mad scientists. For now, I'm considering this mystery unsolved.

What do you think? Does Bigfoot exist?
6 comments: Links to this post