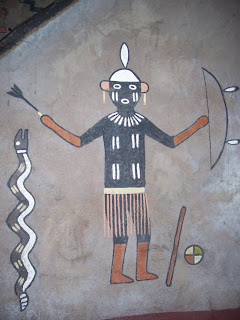 As we neared the end of our Great Southwestern Adventure, we had to decide where on the road to spend Boy Child's 11th birthday. He requested the Grand Canyon, and as luck would have it, we were close enough to make it happen.

We started the day with an attempt at making strawberry pancakes on the Coleman camp stove. They were some of the ugliest pancakes any of us had ever seen, but thankfully, he is not a picky or judgmental child, and he enjoyed our efforts, and the fact that they actually tasted pretty good.

This was followed by presents, which Girl Child and I had to be extremely sneaky to pull off the purchasing of since Boy Child was with us 24 hours a day. We orchestrated elaborate distraction schemes that sent them on made up errands all over the store while I stashed things in the cart. I think I looked a bit like a deranged shoplifter with my attempts at hiding everything, but we managed to get the birthday loot paid for, back to the tent and wrapped in brochures without him being able to identify any of his goodies. 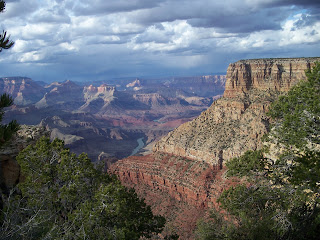 We packed up camp, cramming everything in the car and heading west driving through some isolated and desolate landscapes top the eastern entrance of the Canyon. The Ranger at the kiosk did not seem all that happy about her job and made a semi scowling face of contempt when I asked her about campgrounds.

In honor of Miss Grumpy Ranger, I have a few suggestions for people visiting major National Parks on vacation:

1) Arriving on a Saturday afternoon with no campground reservation is apparently not the best idea.
2)When that Saturday lands during spring break, Free National Parks Week and is the day before Easter, it's even worse, and some of the rangers get really annoyed and look at you like your an idiot when you have the nerve to ask about where you might pitch a tent for the night.
3) The Grand Canyon would probably be a nightmare vacation to take a toddler on. Most of the trails have no railings, and if you aren't paying attention, you could just fall into the abyss. Hence, it is better suited for kids a bit older. 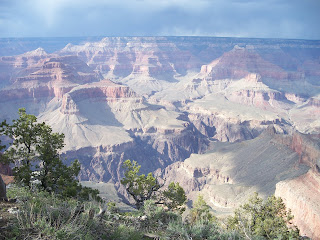 Since worrying about lodging wouldn't help anyway, we decided to just enjoy the drive along the rim, stopping to check out the sights and making our way towards the village. The canyon itself is obviously grand, but so are some of the buildings.

In the early 1900s, a woman named Mary Colter designed a number of really cool structures incorporating natural materials like stones from the park and Native American artwork into buildings that just fit really well into their environment. She was not only one of the few female architects of her time, but she had a terrific ability to bring to life buildings that work- they look like they belong in the landscape, and showcase the incredible views. 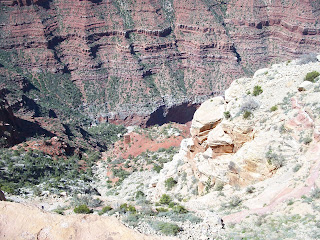 We also learned about the Kolb brothers, a couple of daredevils who are a big part of the history of the Grand Canyon. The two not only took insane boat rides down the river in the days of wooden boats and no life jackets, but also survived and brought back video tapes of their adventures. They set up a photography studio, which they lived in through many harsh seasons, and is now a museum.

By the time we made it to the village area, we knew we needed to start thinking about sleeping arrangements before night came. Of course all the campgrounds had "Full" signs, but I figured at least the Ranger might be able to tell me where the nearest open campground outside of the park was. Instead, she gave me a lecture.

I'm not sure what was with the gruff lady rangers there, but after she got done interrogating me about how important reservations are, and how difficult tourists with questions made her job, she said she would look in the computer and see what she could find. I could not believe when she said someone had just left early and we could have their site for 2 nights! This was an amazing bit of fortune because the closest campground outside of the park that was actually open for the season was 30 miles away! We were all beyond thrilled. 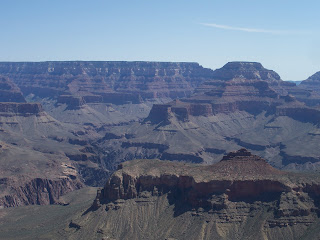 We froze at night, but were able to spend a few relaxing days hiking, riding the shuttles and checking out this big natural wonder. Another tip- it is much warmer in the buildings where the evening ranger programs are than it is in a tent. The programs were nice, but the warmth was wonderful.

When the wind settled down enough so that we weren't worried about being blown off the edge, we descended a few miles down into the canyon. We weren't  prepared for the multi day trek to the bottom and back, but met a group of cool people in their 60's going for it. Maybe we will try that on another trip.  For now, we were inspired by them.

Something else that sounded incredible, but was slightly out of the budget was a raft trip down the Colorado River which ended by being helicoptered out of the canyon. At $500 each plus tax and tip, we had to pass, but it really did sound fun. 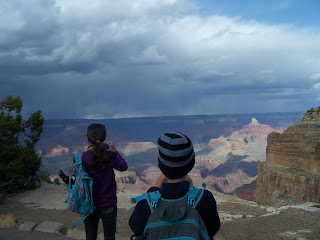 In any case, Boy Child said that this was his funnest birthday yet, which I considered to be a compliment since we didn't have the usual big party with friends. We did have an adventure though, and he seems to be taking after me in that he loves the adventures. Plus, I didn't lose him like I did on his 10th birthday- that was a definite bonus, and is a story for another time.

After Zion and Bryce, then the Grand Canyon, I came away feeling an incredible sense of awe and faith. In the same way that each of these wonders can be so completely different, yet so amazing, I know that there are amazing and different adventures ahead for my family. I had not really had time to contemplate all of the life issues I had planned to on this trip, but somehow, I was feeling totally confident that things would turn out the way they were supposed to. It's been a fabulous adventure so far, and we're all looking forward to seeing where life takes us next.